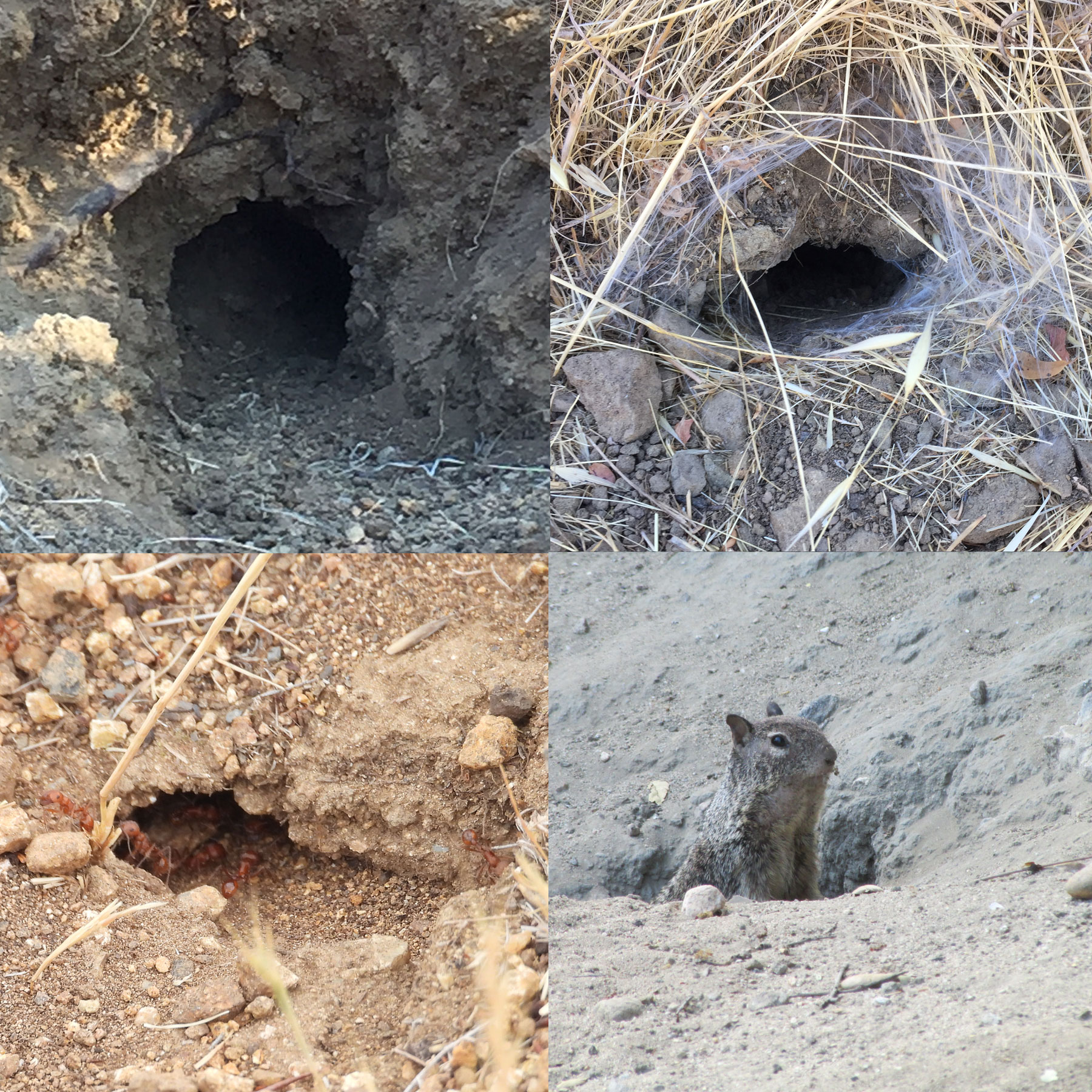 Have you ever taken a hike in Griffith Park and — in between soaking up a dramatic view or enjoying a quiet leafy glen — spied a hole in the ground, the side of a hill, or tucked underneath a low hanging limb? You wonder, “Gee, what critter is making this hole their home?”

These openings to the underground highlight the fact that there is so much more to Griffith Park than meets the eye. While there can be abundant activity going on above ground, what happens in the dirt underneath our feet would probably blow our minds.

Here are three of the more interesting underground occupants that call Griffith Park their home. If you see these or other holes as you visit the Park, we hope you will be respectful and remember these openings are a front door to some critters’ home.

In cartoons, Bugs Bunny has an expansive underground “apartment” with furniture and more; however, real-life rabbit abodes are rustic but comfortably-fashioned with function in mind.

Desert cottontails (Sylvilagus audubonii) create nests lined with grass and with fur that the mother pulls from her belly to make a soft impression for her youngsters. Often, cottontails will repurpose other mammal burrows; they prefer to locate their nests beneath shrubs to keep them even more hidden. Young cottontails are typically weaned at two weeks old and will leave the nest area three weeks after birth.

Unlike European rabbits that create elaborate social burrow systems, the cottontail is more solitary albeit tolerant of neighbors around them.

If the weather is especially sweltering, cottontails will scratch out a shallow depression using their front paws like a back hoe; they will settle in and wait for the day to cool off before braving the outside world.

Cottontails have a lot to watch out for; many predators depend on them for their existence such as hawks, coyote, bobcats, snakes and even squirrels. It’s a pretty good guess that P-22 has found rabbit on his menu during his stay in the Park.

If you discover a nice round hole, you may have found the home of a delightful California tarantula (Theraphosidae), a very docile spider that spends most of its life in underground burrows. Tarantulas will either dig burrows themselves using their fangs, or they will take possession of an abandoned burrow. As they grow, tarantulas enlarge their burrows to accommodate their bigger bodies.

Tarantulas come out at night to hunt for cockroaches, crickets, grasshoppers and newborn mice. Although their fangs contain poison, tarantulas and their bite are not serious to humans. Painful? Yes. Deadly? No.

In the fall, you may see this hairy spider in the daylight hours. From September to October, males leave their burrows to search for a mate. The journey can be treacherous; lizards, snakes, coyotes and foxes enjoy feasting on them. Large tarantula hawk wasps engage in a ferocious battle with its namesake that often leaves the spider paralyzed. A female wasp drags the body back to her burrow to lay her eggs on; then when hatched, wasp larva feed on the tarantula.

For tarantula males that are lucky to make it to a female’s burrow, they will tap on web strands outside the entrance. If the female is willing, she’ll come outside and receive his sperm, which he deposits on a web that she then receives and uses to fertilize her eggs. She’ll seal her eggs in a cocoon and guard them for six to nine weeks; up to 1,000 tarantulas could hatch.

Still, our suitor is not out of the woods yet. Female tarantulas have been known to eat their partners if they linger too long afterward. All this may explain why female tarantulas can live for up to 25 years while the average lifespan for males is only seven or eight years.

Yes, we have a native ant here in L.A. The California harvester ant (Pogonomyrmex californicus) creates underground nests to hold the seeds they spend all day foraging. At night, worker ants defend the nest but will open the entrances in the morning to once again begin the process. The nest entrance is often surrounded by seed husks, a tell-tale sign that you have found harvester ants.

Watch out: a harvester ant’s bite and sting are both painful. Many native plants in the chaparral depend on harvester ants to disperse their seeds. Some of the seeds stored in these underground granaries sprout before they’re eaten.

In addition to their gathering and guarding duties, workers are enlisted to become undertakers; they remove and carry dead ants bodies to a specific location far away from their nest — or place them in a specialized nest chamber.

Many species depend on harvester ants as food; Griffith Park’s Blainville’s horned lizard diet depends exclusively on harvester ants which were plentiful at one time in the Los Angeles Basin. However, introduction of the invasive Argentine ant (Linepithema humile) has displaced our native ants — creating a profound challenge for Blainville’s horned lizards to survive. Originally from South America, these tiny brown Argentine ants hitched a ride in shipping containers and can now be found practically everywhere; as they do enjoy our Mediterranean coastal climate. These are the ants you typically find invading your home.

All the more reason to embrace our California harvester ant!