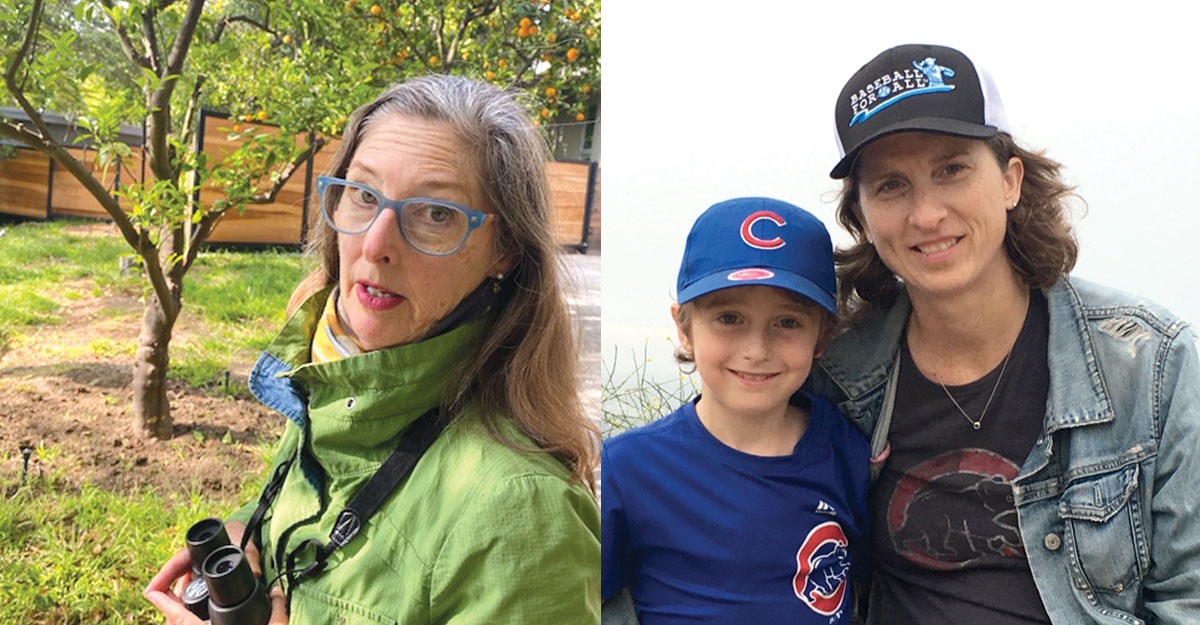 Armed with binoculars, perhaps a clip board and eyes that are continually scanning, Friends of Griffith Park Raptor Survey Volunteers are the backbone of this ongoing and important natural history project now in its fifth year.

Each year, more volunteers sign up which means more nests can be observed which makes for more data and a clearer snapshot of the health of our local raptor populations. Supported by FoGP, the Raptor Survey
is overseen by Dr. Dan Cooper, Courtney McCammon and Gerry Hans who rely on volunteers to monitor and observe nests at least twice a month. (Most volunteers seem to visit more than that.)

Volunteers come from a variety of backgrounds and ages, but they are all united in their curiosity and love of the natural world. Once volunteers taste the fun and importance of watching their nest(s) through the season, they are hooked. Repeat volunteers are common.

Now in her second year as a volunteer, Susan Proffitt has the good fortune to live in Nichols Canyon where she sees a variety of birdlife not far from a street that’s lovingly referred to as “Raptor Road.” So far, she’s found nests for great horned owls, red-tailed and Cooper’s hawks. “I am trying to find a nest for a red-shouldered hawk!” she says. “I want to say I have the ‘Final Four’ when it comes to L.A. raptors.”

That gentle competitive spirit keeps volunteers like Susan returning to the hillsides, peering through tree limbs and focusing across canyons. She admits she’s lucky when it comes to seeing birds; her property butts up against an open space that is owned by the Nature Conservancy.

A mycologist (mushroom scientist) by trade, Susan was thrilled to discover that her love of birdwatching could be tapped for a greater good. “I’ve always been a birder even in my youth,” she says.

Last year, during the start of the pandemic, Susan explained that the survey helped give her days shape and form. The initial quietness of lockdown brought a sense of reflection to her monitoring. “When you go out and just focus on looking and watching, well, it becomes a kind of meditation,” she says. “In those moments, you are fully alert and can feel how you connect with nature.”

A parliament of owls

“You can hear all kinds of owls at night around here,” says Corey Nickerson who lives near Bronson Caves in Hollywood. “Great horned and screech. We are so lucky to live so close to so much nature and to have Griffith Park nearby. Being in it gives you a different appreciation of wildlife.”

As Corey visits her red-shouldered hawk nest (in a sycamore tree) near­ Griffith Park, she’s often accompanied by her 9-year-old son, Benji Greenwald who is learning firsthand about raptor behavior. They too have another raptor goal: to find a nest of a screech owl.

“I grew up in New Hampshire and my father was a biologist and I would often go with him to see bird releases. He was instrumental in helping the bald eagle population rebound there,” Corey says about her lifelong love of birding — which she is now instilling in her son.

Watching the birds in the wild is different than seeing them in a zoo says Benji who walks with his mom 20 minutes one way to monitor the nest. Along the way, the team has seen coyotes, rattlesnakes and lizards.

“Being allowed to experience the birds and watch them as they become a family is incredibly special,” admits Corey. “I’m sure we are going to continue to do this survey for years to come.”

← PREVIOUS ARTICLE NEXT ARTICLE →
← Underground Griffith Park: Holes as Homes Griffith Park Aerial Tram – Not Out of the Woods! →