Griffith Park Aerial Tram – Not Out of the Woods! 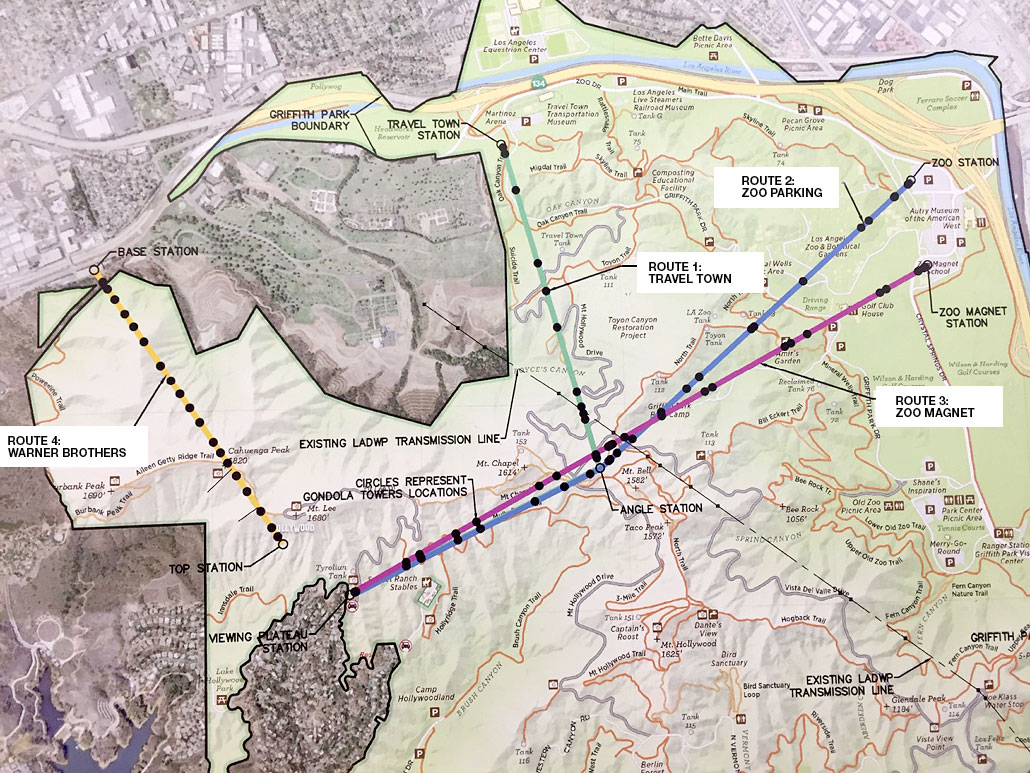 On November 9, 2019, a brush fire broke out at Forest Lawn Drive and Barham Boulevard, near Warner Bros. Burbank Studios. It consumed 80 acres of Griffith Park rugged habitat, including a canyon of high ecological value, coast live oak woodland. It was a persistent slow-moving fire which took a long time to extinguish, but the initial smoke plumes were dense and horrific. 236 fire personnel worked on the ground, five helicopters fought from the air, and two fixed-wing aircraft made water drops. The fire burned halfway to the top of Cahuenga Peak and the Wisdom Tree.

Only now, do we realize it was this brush fire that triggered reality-thinking at Warner Bros., leading them to abandon their hope to build a $100 million ride to the top of Mount Lee and a viewing platform to see the Hollywood Sign so close up it would be hard to get it into one camera frame. Warner Bros. team had pitched the idea with significant outreach to nearby community groups and the City, but that was long before the Cahuenga fire.

On March 18, 2021, Warner Bros. issued an update on what had been promoted as the “Hollywood Skyway,” citing “challenging construction issues” and “protocols necessary to protect guests during emergencies.” What would they have done with a moving tram with hundreds of people traversing both directions through thick smoke?

The Warner Bros. plan was only one of the four aerial tram options being considered by the City. At the time of this writing, the other three options are still very much alive. Each of these alignments is much longer than Warner Bros. abandoned plan, more than two miles, with up to 95 gondola cars operating with a car capacity of 8-10 people each. Do the math to figure lives in danger!

Stantec was hired by the City to study the possible tram alignments, including Warner Bros., taking into consideration technical, environmental, and financial factors. While passenger safety will likely be factored in the final report, this crucial concern didn’t even make it onto the list of bullet points in Stantec’s early outreach with nearby neighborhood and non-profit organizations during 2019-20. FoGP believes safety should have been a priority at the top of the list.

FoGP’s six-page opposition letter sent last year to the Mayor, stated the following, along with habitat, recreation, and other concerns:

According to City Park Ranger brush fire data, an average of eight significant brush fires (.25 acre or more) per year occurred the last three years (2017-2019), a total of 177.5 acres. While a closed-loop tram system might be taking some passengers further from harm’s way during a fire event, the opposite direction might be taking them closer to the brush fire. For this reason, it’s logical to assume that passengers may be put at risk, with no control over self-escape, a terrifying prospect. A brush fire event may be one of the reasons an evacuation becomes necessary, but there are others, as well: power failure, unexpected Santa Ana winds, and mechanical or computer failures.

The 80-acre fire which helped change Warner Bros.’ mind is only a tenth the size of the fire Griffith Park experienced in 2007. And there have been many large fires before, as well.

After Italy’s recent catastrophe that killed 14 riders, we’re reminded that gondola technology is imperfect, and rescues in inaccessible areas will be difficult. Stantec’s recommendations from its $750,000 analysis are expected to be released soon, and the City will have the choice to say “no!” FoGP and at least 30 other entities — including the cities of Burbank and Glendale — have formally voiced strong opposition and continue to encourage the City to abandon all aerial tram options.

Home page image: most gondola routes would stretch across the ridgeline, impacting sensitive areas of the Park