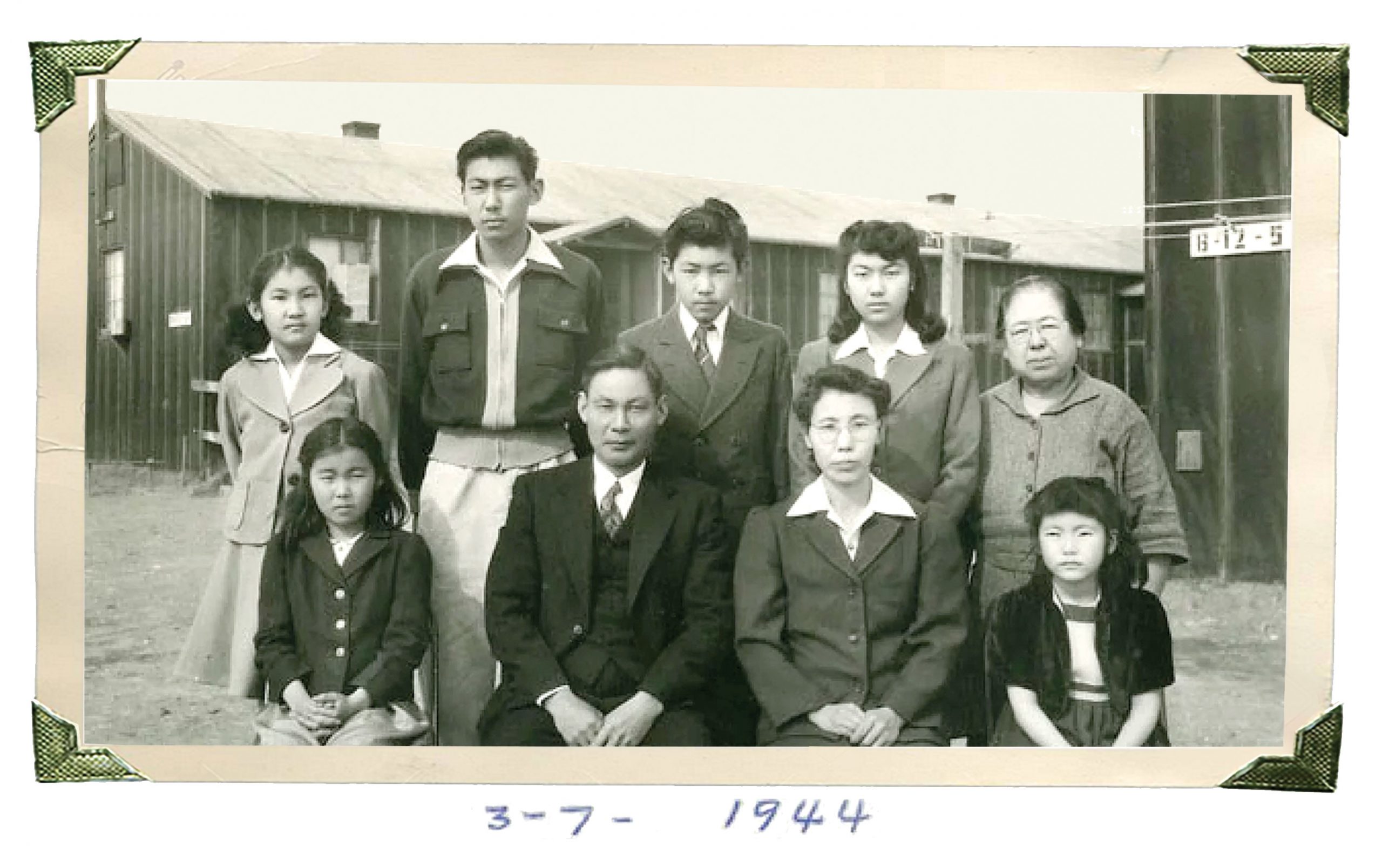 Over the years Griffith Park has responded to urgent national and local housing needs. During the Great Depression the Park housed CCC camps to give jobs and homes to thousands of unemployed men from across the country. After World War II the current zoo parking lot became a Quonset hut Rodger Young Village to house soldiers and their families returning from the war. Currently the Park is hosting a Bridge Housing facility to provide shelter until permanent housing can be located for the unhoused. The Park was also the site of RV units for the unhoused under the RoomKey program. Noble causes all.

However in 1941 Griffith Park had the ignominious distinction of becoming a detention facility. The Griffith Park Internment Camp, run by the U.S. Army, was located in the old CCC Camp Riverside where Travel Town is today. After Camp Riverside was closed, the army used it as a recreational facility for soldiers. Following the bombing of Pearl Harbor, the old CCC barracks was secured to house Issei “enemy aliens.” This facility was surrounded by double fences eight feet high topped with barbed wire. The FBI arrested 35 Issei on immigration violations such as expired visas. Most of the men were fishermen on Terminal Island whose real “crime” was that they were Japanese who worked near army and naval installations and were thus assumed to be a threat. On February 21, 1942, 77 Issei were transferred to the Griffith Park Detention Camp. The camp also held some German and Italian nationals. From there they were transferred to other internment camps such as Ft. Lincoln in North Dakota.

The Uno family’s father disappeared on December 7, 1941. They had no idea what had happened to him until they got an anonymous phone call three weeks later; he might be one of 300 men at the Griffith Park Detention Facility. The family took bags of essential items, yelled outside the fence, and tossed them over the fence to him. A later anonymous phone call told the family to go to the Glendale train station. They packed bags of food and were able to say good-bye to their father as he waited in line to board a train for another internment camp.

The Griffith Park Detention Facility continued to play many roles during the war. In July 14, 1942, it became a POW processing site for Japanese, German and Italian prisoners. In August, 1943, this area became the Army’s Western Corps Photographic Center and Camouflage Experimental Laboratory. In 1947 after the war, this site was returned to the Park.

Sixteen-year-old Takashi Hoshizaki was a student at Belmont High School. Born and raised in Los Angeles, he was active in Boy Scout Troop 33 and especially enjoyed the camping. He helped his dad in his grocery store in the Virgil District. Like most boys, as soon as he turned sixteen, he got his drivers license. This meant he could help his dad by making deliveries to customers. He frequently had to haul 100-pound sacks of rice up several flights of stairs to clients. It was tough work, but it made him strong. Takashi was enamored with aviation. He loved flying model airplanes and was even designing his own model planes.

On Sunday morning December 7, 1941, Takashi went to a large model airplane meet at Western and Rosecrans. When he returned home he learned of the Japanese attack on Pearl Harbor. The next day when he returned to Belmont High School, there was no anger expressed toward the Japanese students. Many had been friends since their days at Dayton Heights Elementary School which had a very diverse student body. The FBI picked up several friends’ fathers, some school teachers and a Japanese principal because they were considered community leaders. Japanese families had to move out of the Terminal Island neighborhood; they sought relatives because word was out that they would be moved by areas and they wanted their family to stay together.

His dad declared that Japan would lose the war because they lacked the resources to win. Nevertheless, he started preparing. Because his father had to close his store, they sold and trucked much of their groceries to another retailer east of the Civic Center. His mother, an excellent seamstress, converted her desk sewing machine to a portable so she could take it with her. A neighbor stored personal items they couldn’t take to the camps in a small warehouse he had on the back of his property. Takashi’s father leased their house to the elementary school principal for three years. That protected their property and the warehouse. He bought boots and canteens for the entire family.

On the day they left home, they gathered at the Hollywood Independent Church for an unknown destination which turned out to be the Pomona fairgrounds. Takashi volunteered to work in the mess hall serving food and washing dishes. The facility served 2100 people at each meal, about 300 per seating. The head cook was Nob, a chef at the LA Country Club, a Nisei (son of a Japanese immigrant). When they were sent to ­, the same mess hall group stayed together. The community helped each other in the camps. They had baseball games and talent shows.

One very hot day, their neighbors visited them at the detention camp in Pomona. The Marshalls, a Black family, had lived in the neighborhood for years and were very well-liked. They had a son Tak’s age so they grew up together. The Marshalls ran a catering business. They brought the Hoshizakis an apple pie – not just an apple pie, but pie a la mode. The ice cream was a welcome treat on the hot day. The Hoshizakis never forgot the special effort the Marshalls made to bring them ice cream. The Marshalls also kept an eye on their property while they were incarcerated.

In August, 1942, a large group of detainees was shipped by train to Heart Mountain. The Black staff on the train sympathized with the Japanese and made sure they got lots of food, too much food, in fact. To Boy Scout Takashi the wide open spaces of Wyoming looked like a great place to go camping when he first stepped off the train. However it was windy and dusty so his sisters were constantly sweeping. He worked the morning shift in the mess hall and went to school in the afternoon where he completed his high school education. His father worked in the poultry yard raising chickens.

Young men in the camp were required to complete a “Loyalty Questionnaire.” Were you loyal to the United States? Yes. Would you serve in the army in a segregated unit? No. So he became a “Yes-No boy.” When he got a notice to report for a physical, he simply didn’t show up. There were 63 resisters in the camp who refused to comply with the draft notice because the internment camps had violated their civil rights and they would be serving in a segregated unit. They were arrested, tried solely on refusing the draft, and sent to the federal penitentiary at McNeil Island in the Puget Sound. Even in prison Takashi made the best of the situation. He took correspondences courses in math and learned to play the piano from a Black inmate. President Truman later pardoned all 63 resisters. Much later in the 1960s he would get positive feedback when people learned he had been a resister.

Back home his family had gotten their house back after the war thanks to the watchful eyes of the principal and the Marshalls. Takashi enrolled in Los Angeles City College where he met his wife Barbara, a Chinese American, in a botany class. He got his masters degree at UCLA. When the Korean War began in 1950, he was still young enough to be drafted. Since his civil rights had been restored, he and several other young resisters signed up. With all the science classes he had at UCLA, he was assigned to the medical corps.

After the Korean War, Takashi pursued his PhD at UCLA where he studied circadian rhythms and wrote a proposal for NASA on the effect it would have on astronauts. He went to work at Jet Propulsion Laboratory where he developed the concept of growing plants in space to feed astronauts. His beloved wife Barbara died in 2012, but Takashi still lives in East Hollywood near his father’s old store. Takashi is very active in the Heart Mountain Wyoming Interpretive Center.

When Friends of Griffith Park was seeking a fern expert to help with the restoration of Fern Dell, we received high recommendations for Barbara Hoshizaki, president of the International Fern Society. She was the right person for the project, a world-renowned expert who had previously worked on a 1960s renovation of the Fern Dell plants. Barbara also penned “Fern Dell Specific Treatment Recommendations.”

In addition to multiple consultations with FoGP, she graciously donated hundreds of cuttings from her own fern collection to plant in Fern Dell. These ferns are currently being propagated by Jorge Ochoa’s horticulture students at Long Beach City College for future planting in the dell.