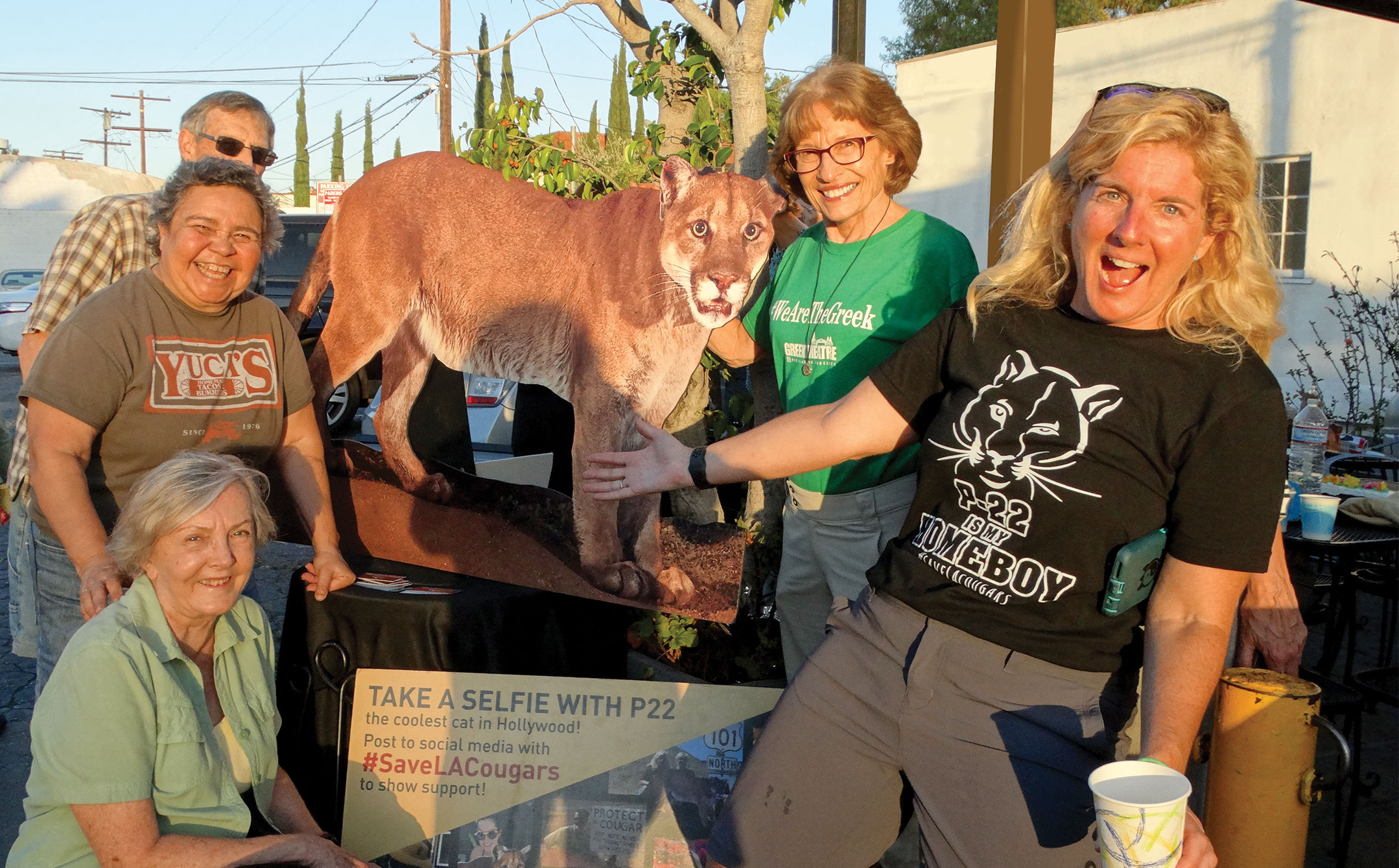 Beth Pratt, the unstoppable force leading the National Wildlife Federation (NWF) in California, names all of her backyard frogs George. That goes a long way to explain why, when the NWF created a region in California, only Beth would do — they wanted someone who was innovative, passionate about nature, wildlife, and conservation. Today, Beth is still the young girl who was inspired to become a biologist by watching Mutual of Omaha’s Wild Kingdom, the movie Born Free, and, yes, Bugs Bunny cartoons “I’m gonna love him, and squeeze him, and call him George”.

That inner kid conceived of a “Go Big or Go Home” idea and reached out to Friends of Griffith Park in 2013. We said yes. Yes, to the biggest Hide & Seek* event put on by NWF across the country. Yes, to a day of instilling our passion for nature to hundreds of young kids in Los Angeles via hikes, scavenger hunts, and inspirational teachers.

At the end of the day, tired, sunburnt, and happy, we knew that more collaborations were in our future.

Several years later, Beth contacted us again — this time about hosting P-22 Day. She remembers approaching FoGP with her idea, and our response was “You want to do a what? A festival for a mountain lion? That’s crazy – we’re in!” She adds, “That’s what I love about you guys. That was an incredible partnership, and hugely successful.”

The first year, a thousand came to celebrate the discovery of a mountain lion living in the urban wilderness of Griffith Park. Last year, 20,000 people participated in a virtual week-long extravaganza. The featured band, Black Pumas has even received a Grammy. The year 2021 marks the fifth anniversary of P-22 Day. Hold on to your hats because we’re planning an in-person — and — virtual hybrid event!

The FoGP-sponsored Griffith Park Connectivity Study yielded a stunning surprise when in 2012, P-22 was discovered by Miguel Ordeñana. This once-in-a-lifetime achievement, spawned worldwide attention to a crisis facing mountain lions — the possibility of extinction due to a lack of connectivity which was causing inbreeding. Several years back Beth again reached out to FoGP with another big, bold idea. An idea that, if we stay on track, will be breaking ground later this year: the Liberty Canyon Wildlife Crossing Bridge. Once completed, this wildlife bridge will be the first in California, and the largest in the world. But it won’t be the last in this state. Beth Pratt will see to that.

When Beth was getting her biology field degree, the dominant philosophy was that “wildlife goes in these pristine places, and that wildlife and people should never co-exist.” The discovery of P-22 in Griffith Park upended that paradigm, sending her on a personal and professional transformation. It took putting the blinders on, and going against senior leadership and traditional scientists within her organization for whom the notion of using a mountain lion personality, of anthropomorphizing P-22, was unthinkable.

Thankfully her boss, Larry Sweiger, had her back and encouraged her unusual, innovative way of engaging people without the “scientificky, techie concept of connectivity and fragmentation” that the public doesn’t care about. Beth learned an important lesson — however we come to protecting wildlife, it’s never about the science or the policy. Instead, it’s about something that captures our imagination.

As she tells it, when Beth first started carrying a P-22 cutout around and posting on social media how he needed a female companion, the reaction from scientists was immediate: “What the hell are you doing?” — and — “P-22 doesn’t date!”

A few months later those same scientists were coming back to her saying, “I get it now. People are coming up to me at events, and asking me biology questions!” Today, she is stopped wherever she goes (whether she’s carrying P-22’s cutout or not) with questions about P-22, and the progress being made on the wildlife crossing. That’s what makes Beth good at what she does — she changed the traditional approach to conservation, creating a case study in how to empower and engage the community, without throwing science at them. That’s why P-22 is a gamechanger — as a charismatic megafauna, he awakened conservation and wildlife groups to the importance of storytelling.

P-22 also challenged Beth to reconsider the notion that there was no nature in Los Angeles, leading her on a journey focusing almost exclusively on urban wildlife. She remembers being “blown away” on her first trip to Griffith Park in 2012 — busting the myth that L.A. is nothing but concrete and freeways. Griffith Park made her look deeper, realizing that it’s not just a city Park but an incredible wilderness Park supporting an incredible amount of biodiversity; even with all the commercialization, it’s still an intact ecosystem in the Santa Monica Mountains. When one considers the number one threat to wildlife worldwide is loss of habitat, it’s imperative to be cognizant that it’s our responsibility to help preserve or reclaim habitat in our human spaces. As Beth exclaims, “I think raising attention to the utmost scientific importance of these city green spaces or parks, no matter how big or small they are, to preserving biodiversity these days, that is something to highlight!”

Our conversation then moved to the plight of the monarch butterfly — a species that nobody thought would ever become extinct because there were once millions and millions of this butterfly in the state. Sadly, however, today there are merely 2,000 left in California! Their biggest threat is habitat loss. Once spaces like Griffith Park and small backyard stopovers which the butterflies rely on for food and breeding grounds are removed, these butterflies are unable to rest and replenish along their long journey.

Consider for a moment, the importance of spaces like Griffith Park for people and health, and also the wellbeing of wildlife. Consider how much we’ve already lost, and how the community is becoming keenly aware of how we can co-exist in ways that may be different. Beth explains, “It’s hard to ignore a mountain lion in your backyard, but if you don’t look deeper, you might miss the butterfly. Or, as Lila Higgins of the Natural History Museum says, ‘We wouldn’t have mountain lions in L.A. if we didn’t have beetles.’”

Beth continues, “Those of us who work for the environment, or wildlife, or social justice know the fight’s never going to be over. It’s up to us to inspire others, to work to fix these injustices or environmental degradation.” And, there it is, the reason Beth Pratt and Friends of Griffith Park get along so well — a shared love of working to protect wildlife and nature in urban spaces with a “Go Big or Go Home” mentality. We have these crazy ideas (okay they’re mostly Beth’s), and we DO them.

Speaking of collaborations, Beth is already plotting new projects: connecting Griffith Park to the Los Angeles River, building a crossing over the 5 Fwy, in the Santa Anas, outside Yosemite, placing wildlife habitats and corridors throughout the L.A. area, and adding more wildlife mobility near Liberty Canyon with projects along the 118 and 126 freeways. Her question to us will always be, “Friends of Griffith Park, are you in?”

*One of National Wildlife Federation’s (NWF) goals with Hide & Seek is to instill a lifelong curiosity and love for the great outdoors. So when this event took place in Griffith Park, the overwhelming response by kids and families alike — we had a great day!

Photo/top: P-22 Day celebrations included a stop at Yuca’s on Hillhurst and an invite to take a P-22 selfie. Dora and Beth were joined by FoGP’s Marian Dodge, Steve Dodge and Mary Proteau (in front)
Photo/homepage: Some of FoGP’s boardmembers join Beth at the end of the day following the Hide & Seek event in Mineral Springs 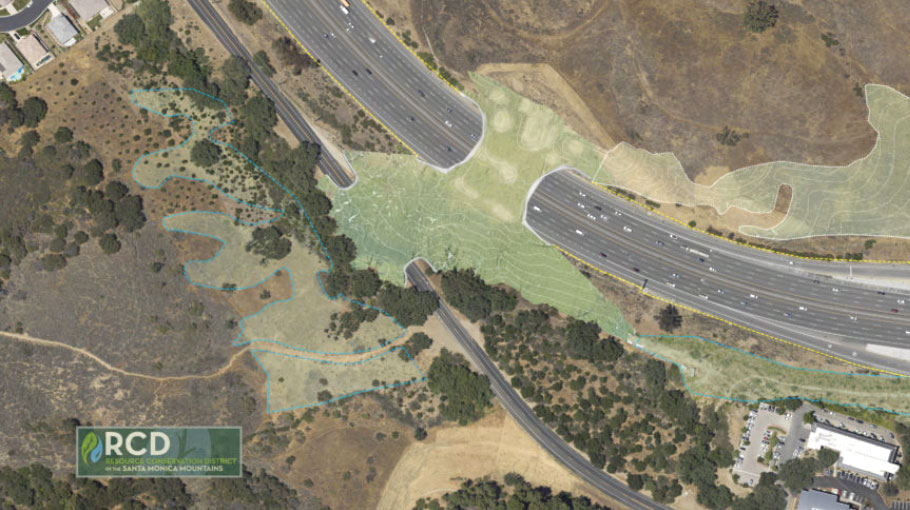 Man-made obstacles have always presented a challenge for wildlife attempting to slip across roadways which is why this crossing is imperative.

Earlier this year, NWF announced they had received a $25 million challenge grant from the Annenberg Foundation in support of the wildlife crossing campaign. While NWF has raised approximately $44 million to date, this massive crossing, spanning more than 200 feet over ten lanes of the 101 freeway will require an additional $35 million to unlock the Annenberg challenge.

If interested in receiving more info or donating, go to https://savelacougars.org/

In a related LA Times article published on 7.4.2021, Louis Sahagún talks about challenges faced by wildlife encountering these freeways (and roadways).