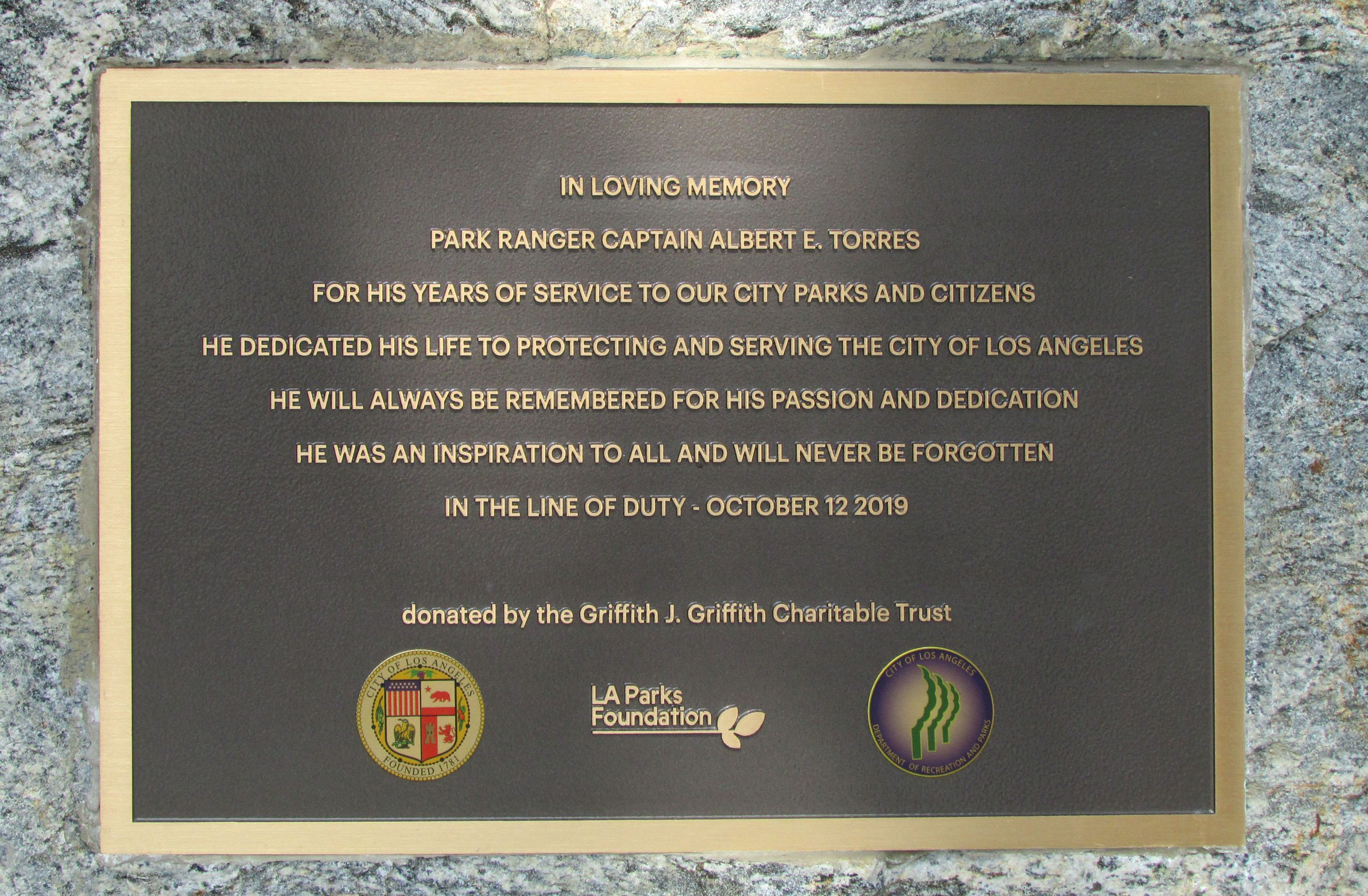 On June 16, 2021, a plaque was unveiled at the Griffith Park Ranger Station, honoring one of LA’s beloved Park Rangers – Albert Torres.

On this warm June day, many were in attendance – including LA City, and Rec and Parks officials, fellow Park Rangers, the Torres family, and many members of the public.

There were speeches by City officials but one standout speech was given by Griffith J. Griffith Charitable Trust’s Clare Darden… These words encapsulate the respect held by many for Albert’s enormous contribution to the public, both as a Park Ranger, and a decent human being. We have several articles about Albert’s impacts in our winter 2019-20 newsletter which can be accessed here.

How Albert loved being a LA City Park Ranger!

And I loved the fact that he had a soft spot in his heart for this park – Griffith. He had a strong passion for every creature, plant, and flower in it.

In my estimation, he was a “Ranger’s Ranger,” and truly deserves our little homage to him here at the Visitor Center courtyard. This beautiful bronze plaque contains heartfelt words that his fellow Rangers composed.
Of course he would be so embarrassed by all this. “but… too bad albert – it’s done!”

I fondly remember the City’s wonderful Memorial Event for him at Friendship Auditorium and being amazed at the huge turnout of his many friends – and then realized there were so many park users he touched every day of his Ranger life who would have loved to honor him also.

We all have Albert stories. In my case, during my many hikes here over the years, I’d just be so pleased to run into him (well, not literally) on a trail, or driving his Ranger vehicle, because that meant we’d have a moment, (or 2, or 10!) to chat.
I especially loved the respect he showed everyone. You know, there’s a word we seldom hear anymore in today’s world that I think sums up the essence of the man. That word is GENTLEMAN.

Thank you, members of the Torres family for sharing your Albert with us. He will be forever missed.

RANGER ALBERT GETS THE LAST LAUGH

At the June 16 unveiling of the memorial plaque for Albert E. Torres, a valuable, respected and much-loved ranger in Griffith Park, retired ranger Anne Waisgerber told a story. She and Albert were the oldest students in the ranger course at Rio Hondo College. For them, the hardest part of the course had been the physical fitness component. They had to run up and down hills toting equipment. One day the instructor pointed to a big rock, which he called “Mr. Rock.” He asked for a volunteer to carry Mr. Rock while running up a steep hill. Students zipped their lips and stared at their feet. Finally, Albert spoke up, volunteering to carry Mr. Rock up and down the hill. The two performed the ascent and descent with panache, and now another big rock is carrying Albert, whose name adorns a bronze plaque affixed to a boulder at Park Central.

As I walked down the hill where I had parked, I saw two handsome horses, a paint and a palomino. One of the fondest memories of my childhood was riding a horse on Griffith Park trails. It was as close to becoming a cowgirl, my ambition, as I would ever get. The rangers who would ride the horses down to the plaque unveiling for their colleague, Albert, were giving the horses a last bit of attention. I told them the horses looked beautiful, then added, “And so do you.”

Clare Darden, from the Griffith J. Griffith Charitable Trust, said she had always been happy to run into Albert when hiking in Griffith Park. “He had a place in his heart for every animal and plant in the park,” she remarked.

Ranger Anne recalled that her home had been one of those destroyed in the 1994 earthquake. She was trapped in a temporarily inaccessible canyon for a few days, but as soon as access became possible, Albert was the first person to reach her. He came with a U-Haul truck.

Mrs. Cheryl Torres and family members were welcomed by Chief Joe Losorelli. Mrs. Torres said that, of all places in Los Angeles, Griffith Park was Albert’s favorite. The Torres family enjoyed many kinds of outings in the park, but every family outing had to include a brief lecture by Albert, about Griffith Park’s wildlife or plants.

About 20 rangers in uniform stood in formation to honor Albert Torres, and one was reminded of how important they are to the well-being of the park and to those us who hike, run, ride horses, watch birds, bike, play and picnic in Griffith Park. 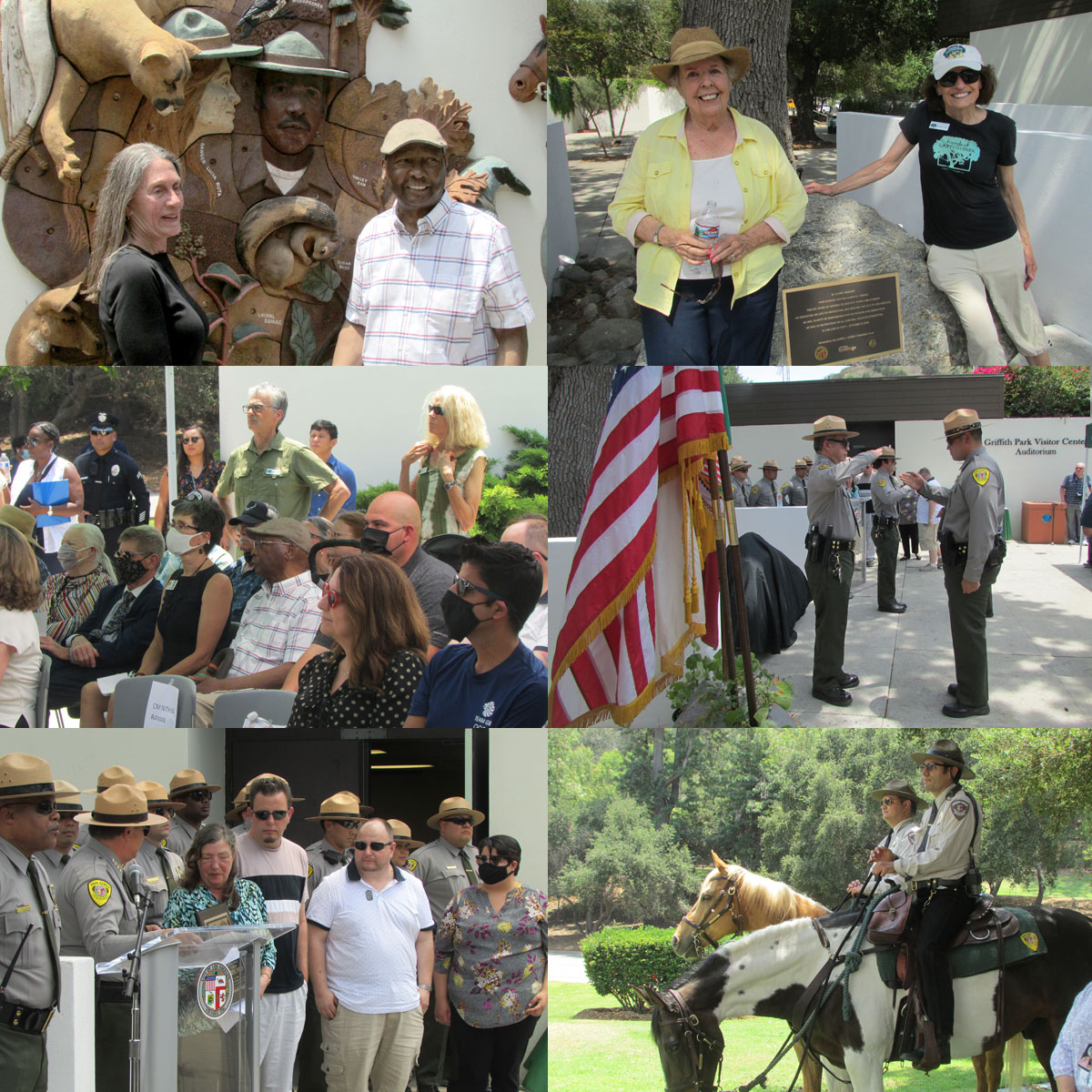 Bottom right: Mounted rangers look on from a shady spot.