In 1914, the L.A. Parks Department decided to create a rustic fern garden in a stream-fed canyon on the western side of Griffith Park. Boulders were moved, dams and pools created, and rustic bridges and planting beds built. Wild, irregular and natural-looking, the Picturesque Style spot was christened “Fern Dell” and became an immediate hit with the public. Throughout the 1920s, work in Fern Dell continued in bits and pieces and by decade’s end was one of the most popular areas of Griffith Park.

Enter the Depression. During the 1930s, the Civilian Conservation Corps (CCC), tasked with conservation and construction projects in national, state and local parks, established three live-in camps in Griffith Park. Corpsmen assembled in Fern Dell each morning to receive assignments. Using the National Park Service manual as their guide, they built additional water features, paths, bridges and structures and extended Fern Dell to the north end of Western Canyon. Today this work is referred to as “Park Style” by architectural historians.

As you walk through Fern Dell, keep an eye out for gravity walls with slightly battered setbacks, which signifies the mortarless stone that was set in place by hand. The styles and type of stone used constantly change, reflecting the skill and design choices of the individual workers. Complementing the stone work are railings made of concrete sculpted to look like logs, a technique popular in the late 19th century through the 1940s referred to as faux bois.

In the 1960s Fern Dell began to slip downhill as visitors began straying from paths and trampling (or helping themselves) to ferns in the area. Post Prop 13 cuts further destroyed the area as maintenance was deferred and specialized knowledge necessary to maintain ferns was lost. Vandalism and crime increased with the Department fighting what seemed to be a losing battle.

In the late 1980s, concerned neighbors rallied the City to undertake a short-lived rehabilitation of a portion of Fern Dell. Repairs were made, plant stock renewed and, in 1989, metal bridges were installed, replacing the original picturesque but rotting spans. Fortunately, enough remnants of these original character-defining features survive so they can be recreated by modern craftsmen. Huntington Gardens’ recent restoration of the elaborate faux bois pergolas in its rose and Japanese gardens shows the way. Stabilizing and rejuvenating Fern Dell’s unique hardscape is an essential step in the journey towards the ultimate revitalization of Fern Dell.

The Cultural Landscape Assessment that emerged from Phase I of Friends of Griffith Park’s Fern Dell Preservation Project analyzed and recorded Fern Dell’s unique architectural features. It also studied the landscape’s trees and plants with special emphasis on its signature ferns.

The botanical component was prepared by a team of horticultural experts led by the late Barbara Hoshizaki. President of the American Fern Society, consultant to Sunset Western Garden Book, Hortus Third and Time-Life Fern Book, and Curator of Ferns at UCLA’s Mildred Mathias Botanical Garden, Barbara’s knowledge and love of ferns remains legend. Her co-consultant, Jorge Ochoa, Director of the Horticulture Program at Long Beach Community College (LBCC) and a Research Associate at Rancho Santa Botanic Garden, worked closely with her to inventory the more than 40 individual fern species historically present in fern Dell and recommend those best suited to returning the site to its former beauty when the proper time comes.

Both consultants went beyond the scope of their contracts to give generously of their time and materials. Barbara Hosihizaki donated a portion of her extraordinary private fern collection to Fern Dell’s revitalization efforts – valuable specimens and sports that, properly handled, will multiply, flourish, and be ready for planting during the project’s implementation stage. To nurture this living donation, Jorge has volunteered his know-how and the skills of his students in the LBCC Horticulture Club. The specimens are currently being held at LBCC’s modern facilities where students are propagating and growing the donated ferns for future transfer to Fern Dell.

The remains of Fern Dell’s “Fountain of Youth” can be seen from the pathway. These faux boulders were created by CCC to mimic real boulders and enhance creekbeds. Eventually this area will be filled with water and the features restored.

Fern Dell’s year-round waters have nurtured centuries of life and were an important reason why the Gabrielino Natives chose Western Canyon as the site of their Council Grounds. Before the coming of Eurpoeans, the Gabrielinos were the principal residents of Los Angeles. They lived in thatched wicker houses, created ocean-going wood canoes, carved soapstone animal effigies and wove beautiful baskets. In 1973, the city recognized the Gabrielinos’ Council Grounds called “Mococahuenga,” as municipal landmark #112. (In 2009, Griffith Park received in its entirety, City of Los Angeles’ Historic-Cultural Monument #942, making it the largest city landmark in LA and the largest municipal landmark in the United States).

Fern Dell’s original waters were augmented by the city. In1914, when the Parks Department embarked on the creation of Fern Dell, rights to a nearby spring were purchased and wells were dug to increase the water supply to the area. About this time the belief appeared that Fern Dell’s spring had curative powers – an idea that originated perhaps with the health-seeking immigrants to Los Angeles who believed the city’s Mediterranean climate could conquer tuberculosis and other illnesses.

At first, believers filled their jugs directly from Fern Dell’s well. In the ensuing years, a grotto source was mentioned, and by the 1950s, the city had installed faucets to serve water-seekers who lined up daily. Doubt greeted the 1960s campaign to convince the public that Fern Dell’s tab water came directly from DWP and, finally the faucets were simply removed. The last known site of the “Fountain of Youth” can be seen on the west side of Fern Dell drive just a few steps north of Los Feliz Blvd. Today, a standard-issue metal drinking fountain marks the spot. 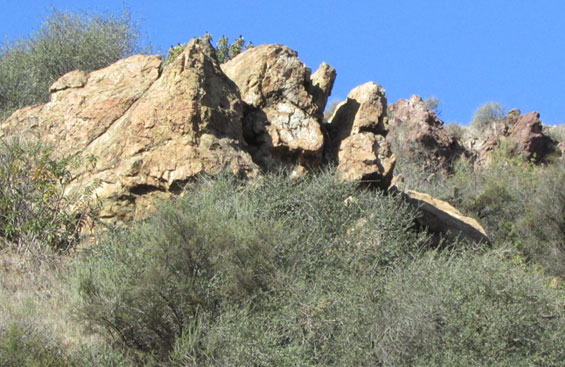