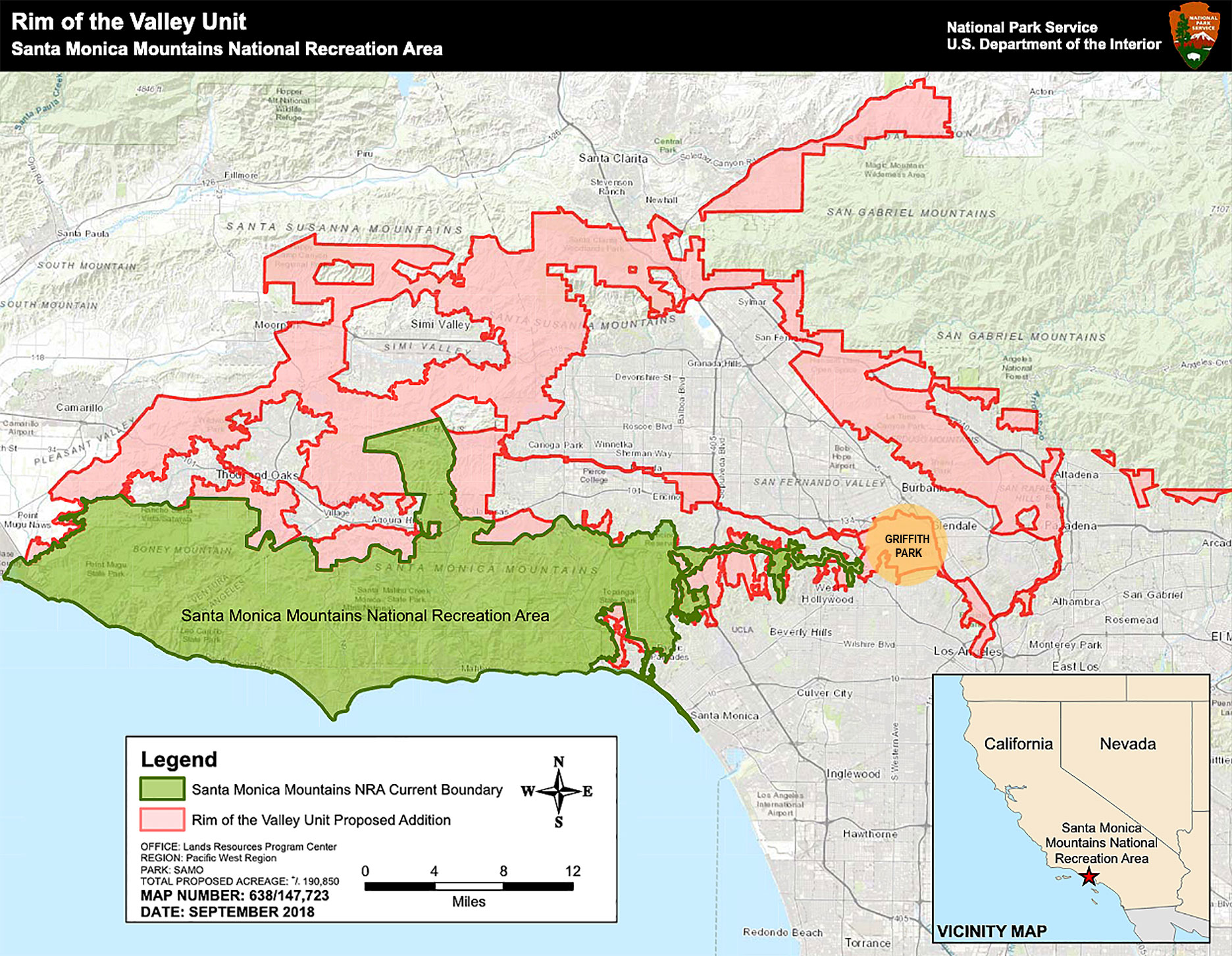 Sometimes moving forward requires a long look back and deciding whether the path we’re on is the best path for the future. When Spanish colonists first arrived in the small pueblo now known as Los Angeles, little did they realize how expansive this city would ultimately become.

As the city grew, so too grew encroachment into wilderness areas, followed by consumption of green spaces. Even now as urban growth continues, seemingly unabated, a new conversation is taking shape – how to create recreational opportunities for millions of Los Angelenos which will increase, rather than diminish, their quality of life.

Enter Rim of the Valley (ROTV) — an idea that’s been a long time in the making. This ambitious project was first introduced by California Congressman Adam Schiff who’s been advocating for more than 20 years to make ROTV a reality. During the years-long study, environmental activists, city and government officials, along with the greater LA community, were invited to weigh in on various aspects of the proposal. During outreach meetings, many in the community voiced concerns that this legislation was needed sooner, rather than later — otherwise, more green space would fall victim to large development interests. Other respondents felt it was imperative to include wildlife corridors in the final project which would offset lack of genetic diversity in many species, particularly mountain lions. also see A Force of Nature.

What’s Rim of the Valley all about?

For those unfamiliar with this legislation, ROTV would expand the current Santa Monica Mountains National Recreation Area, tying together portions of land currently displaced by man-made obstacles — such as freeways and residential zones. By weaving together areas that loop around the Los Angeles basin, recreational opportunities would also be created for millions of LA residents. And, if this legislation passes the U.S. Senate, there will also be a marked increase in habitat for many species that call LA home.

Currently, as indicated on the map, the Santa Monica Mountains National Recreation Area encompasses a large swath of land to the west. The addition of land further north, east and even areas in downtown LA City (indicated in red) would allow for greater movement of species, especially once the Liberty Canyon Wildlife Bridge is completed near Agoura, to the northwest.

Land added to the San Gabriel and Santa Susanna Mountains would allow big cats and other large species to move safely across man-made barriers, into more natural environments, and hopefully lessen the number of vehicle-related deaths. In addition to the Liberty Canyon Wildlife Bridge, more connective crossings should receive consideration, especially as genetic diversity for some species is under threat across the entire basin.

Now that ROTV has finally passed the House of Representatives, Friends of Griffith Park is cautiously optimistic that it’ll pass quickly through the Senate.

If this bill passes, Griffith Park would receive more protections as an extension of the Santa Monica Mountains National Recreation Area. The idea makes sense because Griffith Park is located on the easternmost edge of the Santa Monica Mountain range and is currently considered a landlocked area since it’s surrounded on three sides by residential zones, freeways and the encased-in-concrete Los Angeles River.

It’s time to move forward and get the bill passed — which would move Los Angeles toward a greener future for all living in this community!