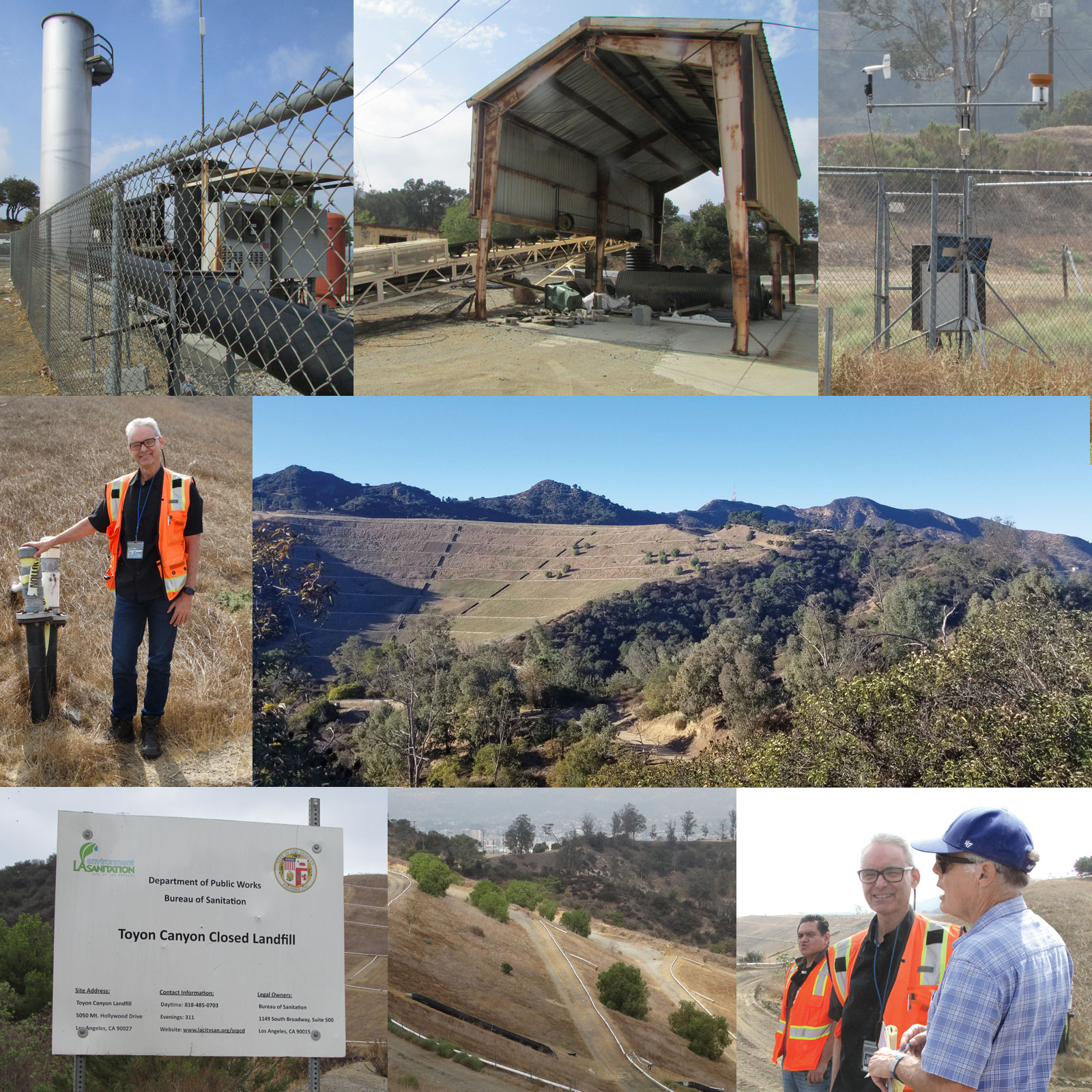 Motorists on the 134 freeway have seen the oddly-terraced hillside that is in Griffith Park, but does not appear to be part of it. Hikers, runners and equestrians have explored it, but are not quite sure what to make of this semi-public nether world. And Friends of Griffith Park members no doubt wonder how L.A.’s grand signature park somehow became the site of a landfill.

August 1956. Los Angeles is awash in growth and smog. Cars were the leading culprit, but backyard incinerators were also a significant contributor. The city council—perhaps recognizing they couldn’t do much about the automobile—outlawed use of incinerators and approved collection of combustible rubbish as a municipal service. But what to do with all the rubbish that would have been burned in the past? Compacting trash into bales and sending it to the desert was considered, then rejected. And local politicians were leery of contracting with privately-owned dumps. (Some city leaders feared monopolistic practices, or even organized crime.)

With a majority on the city council favoring municipally-owned dumps, Griffith Park’s rugged and remote Toyon Canyon entered the picture. The Recreation and Parks Commissioners—perhaps trying to make the best out of a bad situation—authorized “development” of the canyon in April 1957. The publicly-stated plan was that the canyon would eventually become flat land suitable for tennis, basketball, volleyball, picnicking and parking facilities. All of this was to be completed within five years.

Some saw a constructive link between rubbish disposal and recreation. The Los Angeles Examiner gushed that the reclaimed Scholl Canyon dump site in the hills above nearby Glendale was “a new, expansive and beautiful recreation area.” Los Angeles Mayor Norris Poulson thought that trash dumps could be made downright beautiful: “The filled sites, which are now virtually useless, can become, when completed, our most beautiful parks and playgrounds. … This is one of the cheapest ways I know to build beautiful parks and recreation centers in our long-range program of developing Los
Angeles.”

Van Griffith—Col. Griffith’s son and chief Park protector—apparently thought this was, well, rubbish. He filed suit in Superior Court, arguing that the site (originally 40 acres) would not be used for Park purposes and that the project would destroy the Toyon plant, more commonly known as California holly.

Toyon Canyon soon became an integral part of the city’s rubbish disposal plan. By October 1959, it was handling half of the city’s combustible rubbish, about 1,200 tons a day. At that time it was estimated that Toyon Canyon could accommodate about nine million cubic feet of rubbish. In fact, things were going so well that the city was beginning to eye an adjacent canyon as another dump site.

And what became of the recreational site that was to be created atop Toyon Canyon within five years of its 1958 opening? In July 1961, a senior Recreation and Parks official told the Los Angeles Times that the dump could soon be reclaimed for 37 level acres of small sport play areas. A November 1964 Westways article held out hope that the area would soon be turned into “a pleasant picnic area.” The Park’s 1968 Master Plan suggested a picnic area and a 2,885-yard, par 36, 9-hole golf course, punctuated by a lake and streams. A 1978 plan envisioned a 90-acre “Toyon Meadow” that would be a festival site, trail head and perhaps the location of a youth hostel.

None of it happened

By 1985, 16 million tons (nearly double the capacity predicted in 1959) of L.A.’s waste had turned the former Toyon Canyon into a 400-foot-tall, flat-topped hill. Some of it was methane-producing organic waste. Hikers—including the author of this article—remember how the ground smoldered at the landfill. Garbage trucks were so common on the stretch of Griffith Park Drive—uphill from Travel Town—that Park regulars called it “Trash Truck Hill.” And Royce’s Canyon, which can today be accessed by a short, pleasant trail, was targeted to become the Toyon II Landfill. Pressured by the Sierra Club and others, Mayor Tom Bradley publicly urged abandonment of the Toyon II project in March 1985. The original Toyon site was shut down in November.

Eventually, the site became mostly about turning methane into electricity. In the 1980s, the Toyon Landfill powered five generators. Today, with the site producing only a fraction of the methane it once did, it can support a single one-megawatt generator, and that isn’t operating at present. A methane flare, covered by a silo-like  structure, burns off gas until an outside operator takes charge of the generator.

After more than 60 years, the Bureau of Sanitation has settled in as part of the patchwork of city agencies, for-profit and nonprofit organizations, citizens groups and others that comprise Griffith Park. At the top of Trash Truck Hill, the bureau operates the Griffith Park Compost Facility. Maintenance crews collect organic matter from the Park—everything from dropped leaves to elephant poop (called “Zoo Doo”)—and bring it here to blend with chipped Park greenery. The resulting compost (trademark name TOPGRO) is used around the Park and given away to the public.

From the Compost Facility, our small tour party is taken up the North Trail from Mineral Wells, past Amir’s Garden, and on to the area described rather optimistically on some Park maps as the “Toyon Canyon Restoration Project.”

Standing on one of the upper “benches,” which function as terraced access roads, one can imagine the hilltop meadow envisioned in the 1970s. Less passive uses of this manufactured land—baseball fields, let alone a youth hostel—are impractical, and will continue to be for the foreseeable future. John Hamilton, an environmental engineer with the Bureau of Sanitation, points to one of the places where noticeable settling has occurred and will continue to occur for longer than the readers of this newsletter will be alive. However, he speculates, the grid of gas pumps and pipes should be taken out of service within the next half century.

Our group stops at an unusual sight—a small tree. Couldn’t the landscape be made more attractive if trees were planted? Well, no. The landfill is covered with a five-foot layer of monofill. It is clay-like and densely packed. Roots can go down two or three feet into the monofill, but the last two feet are to remain as a barrier to the rotted refuse. In fact, foliage with root systems deep enough to penetrate all five feet of monofill are in danger of being removed.

Native shrubs with shallower root systems that can survive in this strange artificial environment are not only possible, they are being tested at another of the city’s closed landfills, Lopez Canyon in Lake View Terrace. Miguel Zermeno, a Solid Resources Manager with the Bureau of Sanitation, speaks hopefully about “healthy soils” which are the antidote to landfill soil which can become deoxygenated by the ever-present gasses. Areas in the landfill that are non-vegetated will be treated with that soil along with hydroseeding of native plants.

Despite these obstacles, some revegetation began in 2014: white sage, buckwheat, sugar bush and, yes, toyon have been planted in five-gallon pots. The hope is that toyon will reestablish itself naturally (or at least semi-naturally) on the site.

For now, there are trails and roads along the periphery of the landfill. And some equestrians, hikers, trail runners, and birders (the bird population is noticeably robust) roam the benches.

Improvement in this part of Griffith Park is likely to happen slowly. But eventually, the methane harvest—which declines every year—will decrease to a level where the power-generating facility will permanently shut down and the gas collection pumps and pipes will be unnecessary. Future generations of FoGP activists would be wise to pressure the appropriate city departments to remove what could easily become useless, derelict equipment.

Eventually, the appearance of the area — to freeway drivers, at least—should be improved. “After the shrubs come back,” Hamilton notes, “you won’t even notice the benches.”

photos:
top left/center: Some of the equipment and buildings were left on site when methane was being collected. Now the rate of collection has been dramatically reduced.
Center/left photo: LA Bureau Sanitation employee John Hamilton proudly stands beside one of the pipes he helped install when methane collection was operating at full capacity. Right: A view of Toyon Canyon from the opposite ridge overlooking the landfill. Photo, courtesy: Dora Herrera
Bottom/left: Signage announces the Toyon Landfill is permanently closed. Center: Despite the monofill which is supposed to deter trees from propogating in the landfill, pepper trees continue to emerge. Right: Author Mike Eberts discusses the history of Toyon Canyon and its future plans with LA Bureau Sanitation employees John Hamilton (center) and Miguel Zermano (left)
All photos (except as indicated), Kathryn Louyse

~Author Mike Eberts is a professor of Mass Communications at Glendale Community College, a title he’s held since 1987, and author of the 1996 book Griffith Park: A Centennial History.
He is a member of Friends of Griffith Park Advisory Board.