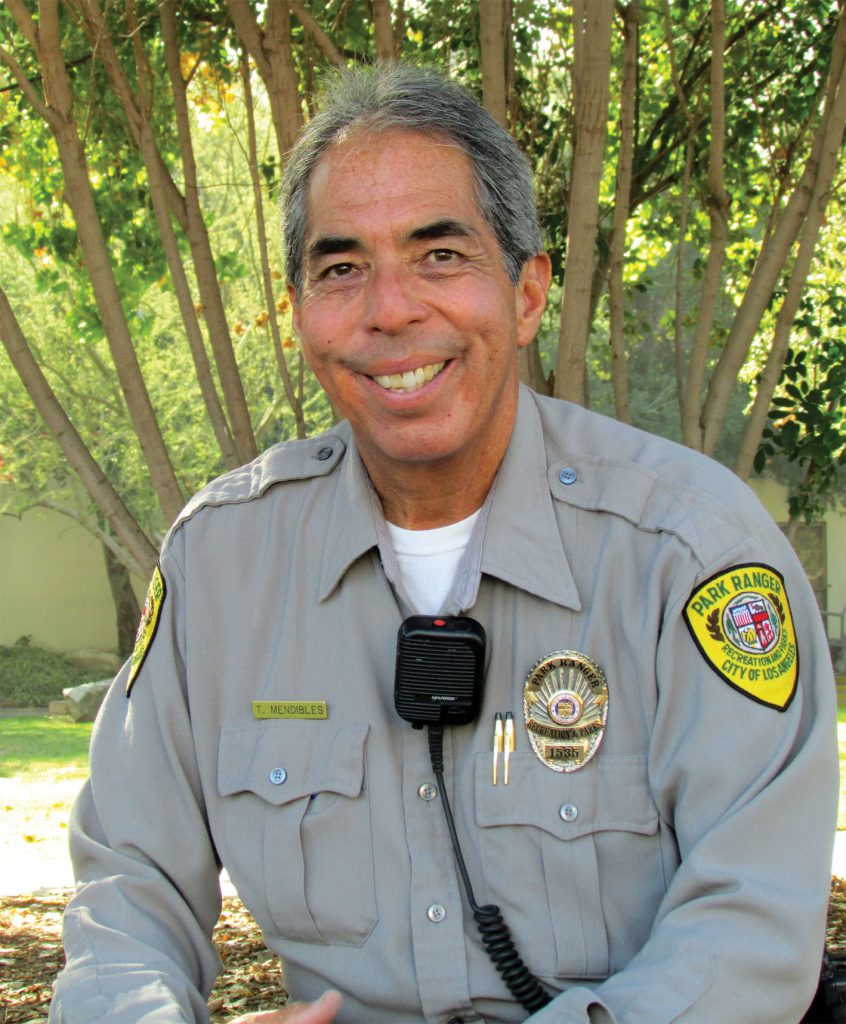 To understand the role played by Park Rangers over time in Griffith Park, I turned to Mike Eberts’ Griffith Park: A Centennial History. I learned that long before a pilot ranger program was created in the 1950s, looking after plants and people was a job filled by gardeners and park foremen. By the mid 1960s, several rangers were delegated to visit parks across the country to learn their practices and how that care can be translated to LA City parks. By the early 1970s, a mere 23 rangers patrolled all LA City parks. Over the years, the number of rangers did increase, but 2020 was a tough year and many throughout local government chose to retire, including some employees in the Parks Division. Currently the number of Park Rangers stands at about 28.
­
To get a Ranger’s perspective on changes that have happened over the years, I contacted Ranger Tom Mendibles who’s seen his job responsibilities change from the late 1980s to today. He has over 30 years logged in as a Park Ranger working mainly in Griffith Park. Perhaps you’ve encountered him in the Park?

I met with Ranger Mendibles as he was coming back to Griffith Park Ranger Headquarters following an incident at the Greek Theatre: a large pine had toppled over the evening before, pinning about 30 parked vehicles along the upper theatre lawn and injuring one woman. Ranger Mendibles had been meeting all morning with unhappy car owners, explaining how the insurance process works in situations such as this. Takeaway lesson: Park Rangers respond to a variety of situations, from dangerous and life-threatening to the sometimes tedious paperwork!

We turned to a question I’ve always been curious about – namely, was the job a childhood dream?

Well, not really, he says with a laugh. Ranger Mendibles explained he was originally more interested in becoming a firefighter with the LAFD, but there were no openings at that time. At a City-sponsored job fair in 1989, someone waved him over and asked if he’d ever considered a career as a Park Ranger. He hadn’t, but he filled out an application. After an interview at City Hall East, and an abbreviated training at Rio Hondo Police Academy, he was headed to his first assignment as a newly-coined supervisor.

Mendibles explained his job was very different back then; City officials were struggling to contain gang-related issues across the entire region – and parks were not immune from incidents and graffiti (tagging) on buildings, picnic benches and even trees. Fern Dell was especially targeted; folks were understandably nervous about visiting this area, and other areas in Griffith Park.

Initially Ranger Mendibles was part of the team that transitioned from one responding primarily to gang activity to a role we know and encounter today along Park trails and roadways. It’s a role where rangers can become environmental or Park history experts, lead interpretative hikes, or focus on safety and enforcement. Or, as many rangers do today, see their jobs as a combination of all of the above.

We discussed difficulties during the transition, but another shift in policing came in 1991 after the Rodney King video and ensuing public uproar. There would be a new attitude about how law enforcement would deal with the public, a policy that also extended to City Parklands. In the following years, LAPD’s Safe Park Program provided park goers with a renewed sense of security that welcomed numerous visitors back to areas once regarded as off-limits.

Ranger Mendibles and I brought the conversation to today which can at times seem reminiscent of his early career dealing with gang-related incidents. I asked how people can feel comfortable and safe while recreating in Griffith Park.

“The important thing is to always be aware of your surroundings,” he says. “It doesn’t matter if you’re crossing the street to your car, or riding your bike along the LA River. If for whatever reason you feel unsafe, turn around and go elsewhere. Or, better yet, bring a friend along when hiking or biking — not only does it make a more pleasurable outing, there’s safety in numbers.” Then he adds, “And also bring water. More than you think you’ll need!”

I asked Ranger Mendibles to share one of his favorite Park stories. He was happy to tell this true story:

One day, CD 4 Councilmember Tom LaBonge requested a Park Ranger to accompany him and a special guest on a hike in Griffith Park; the guest turned out to be Congressman Adam Schiff. As they hiked from Mt. Hollywood to the Hollywood Sign, LaBonge asked Ranger Mendibles “Who’s the most famous individual you’ve ever encountered in the Park?” Ranger Mendibles responded, “Well, of course, it’s you Tom.” LaBonge exclaimed “No, no, no!” and then pointing to his guest: “It’s Adam Schiff!”

As I talked with Ranger Mendibles, I became even more impressed with his dedication and compassion; he says he’s privileged every day to work in a place as special and unique as Griffith Park. “Every day in this Park is different,” he says. “Sometimes days can be quite surprising, but always rewarding.”

We talked about how Park Rangers can positively engage to diffuse possible dangerous situations. We both shared how Ranger Albert Torres’ approach and style was inspirational. Ranger Mendibles had a great respect for the Ranger Torres who handled hot incidents with a cool head, compassion and friendly demeanor.

Ranger Mendibles relates a personal story: A few years ago, he was headed home from a day on the job when a call came over the radio. It seems an individual in great distress was up behind the Hollywood Sign. Few details were given, and no other rangers were available to take the call. So Ranger Mendibles turned the car around and headed back to the Park, eventually locating the distraught individual. Ranger Mendibles simply talked with the man for a while and finally persuaded him to climb down the hillside.

Ranger Mendibles could have ignored that radio call. He was off-the-clock and did not need to respond, but he did. He engaged with a person in obvious emotional turmoil, responding with concern and care. Taking the time to see that person as a human being.

We are lucky to have rangers like Ranger Mendibles stationed in Griffith Park, responding to calls, reacting with humanity and integrity. If you see him or other rangers on the trails, don’t forget to say “Hi there!” And “Thank you!”