Friends of Griffith Park was recently contacted by Zach Behrens from National Park Service (in partnership with the Santa Monica Mountains Fund) to report on the latest death from ingestion of rodenticides (rat poisons)… a very preventable death.

Thousand Oaks, Calif — Necropsy results for Bobcat 332 are in and the findings are what biologists suspected. The 3-year-old wild cat had anticoagulant rodenticide, commonly known as rat poison, in his system. Specifically, very high levels of the compound bromadiolone were found, in addition to brodifacoum, difethialone, and diphacinone.

“Cases like this continue to tell us that household rat poison is penetrating the ecosystem with deadly consequences,” said Joanne Moriarty, a wildlife ecologist for the National Park Service. “I hope B-332’s fate can inspire residents to look to alternative means for managing rat problems.”

Rat poison works its way up the food chain as it is consumed first by target animals or other rodents, and then they are in turn eaten by predators. For example, poison in a rat eaten by a coyote, which in turn is eaten by a mountain lion, will be found in all three species. Since 2002, rat poison has been found in 90 percent of bobcats analyzed as part of a long-running National Park Service study of bobcats in and around the Santa Monica Mountains. 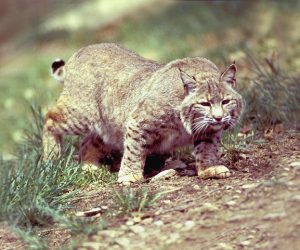 B-332 died on December 19, 2016, in Simi Valley. Residents in a neighborhood flanking the Simi Hills reported a mangy bobcat hanging around. Local animal control picked him up, euthanized him, and, noting the research GPS collar, contacted and delivered the body to Moriarty, who estimated he would likely have died within a day.

The connection between exposure to anticoagulant rodenticide and mange, a parasitic disease of the hair and skin, is still not fully understood. Previous NPS research, however, has found that bobcats that have ingested rodenticide are much more likely to suffer from severe mange.

The prevalence of mange peaked between 2002 and 2006 in the Simi Hills area, during which time more than 50 percent of radio-collared bobcats died as a result of the condition, overtaking vehicular collisions as the leading cause of death among the local population. Although few cases were seen in the Simi Hills by 2008, until about 2013, unfortunately more cases have been seen again in recent years.

B-332 was first captured in December 2015 in Westlake Village, on the southwest end of the Simi Hills. He traveled as far east as the City of Hidden Hills and the community of Bell Canyon, then moving northwest and eventually landing in the Simi Valley area when his GPS collar malfunctioned in May 2016.

Since 1996, the National Park Service has been studying carnivores in and around the Santa Monica Mountains to determine how they survive in an increasingly fragmented and urbanized environment. During the course of the study, biologists have studied more than 340 bobcats, 145 coyotes, and 50 mountain lions.

Bobcats (Lynx rufus) are small, spotted cats that inhabit most of North America, including all of the United States, most of Mexico and southern Canada. Often mistaken for mountain lions in Southern California, bobcats are much smaller and have a short tail, ear tufts, and a pronounced facial ruff, similar to a beard. They typically weigh between 12 and 25 pounds.

Santa Monica Mountains National Recreation Area (SMMNRA) is the largest urban national park in the country, encompassing more than 150,000 acres of mountains and coastline in Ventura and Los Angeles counties. A unit of the National Park Service, it comprises a seamless network of local, state and federal parks interwoven with private lands and communities. As one of only five Mediterranean ecosystems in the world, SMMNRA preserves the rich biological diversity of more than 450 animal species and 26 distinct plant communities.
For more information, visit www.nps.gov/samo.