On Friday, March 24, 2017 Beth spoke about her recently published book “When Mountain Lions Are Neighbors: People and Wildlife Working It Out in California” and the importance of connectivity in nature. Her book and many of her talks revolve around the remarkable journey undertaken by mountain lion P-22 who crossed two freeways and heavily-urbanized landscapes, ultimately arriving in the largest urban wilderness in the United States. (For those who were unable to attend, the complete video is at the bottom of this article.)

Currently Beth is involved with bringing the plight of animals isolated by freeways, often becoming vehicle-involved victims as they attempt to cross. One project Pratt-Bergstrom is working on – construction of a wildlife crossing bridge near Liberty Canyon in Agoura Hills. The plight cannot be emphasized enough as two mountain lion deaths recently occurred along the 118 Fwy when P-39 and one of her three kittens were killed within weeks of one another.

About Beth Pratt-Bergstrom  Beth has worked in environmental leadership roles for over twenty-five years, and in two of the country’s largest national parks: Yosemite and Yellowstone. As the California Director for the National Wildlife Federation (NWF), “I have the best job in the world” she says, “while advocating for the state’s remarkable animals, I get to travel around California and spend time with condors, mountain lions, porpoises, pika, and foxes, and work with some amazing people who help wildlife thrive.” 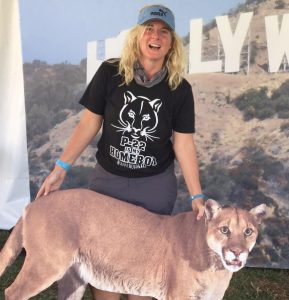 Before joining National Wildlife Federation in 2011, she worked on sustainability and climate change programs for Xanterra Parks & Resorts in Yellowstone as its Director of Environmental Affairs. Prior to her role in Yellowstone, for nine years Beth served as the Vice President/CFO for the non-profit Yosemite Association (now Yosemite Conservancy) in Yosemite National Park. She graduated from the University of Massachusetts at Boston with bachelor’s degrees in management and biological anthropology, and a minor in marketing. She also obtained an MBA from Regis University in Denver, and earned the U.S. Green Building Council’s LEED AP credential.

Currently Beth serves on the board of the non-profits Outdoor Afro and Save the Frogs!, and she has trained with Vice President Al Gore as a member of his Climate Reality Project Leadership Corps. Her conservation work has been featured by The New Yorker, The Wall Street Journal, BBC World Service, CBS’ This Morning, The LA Times, The Washington Post, and NPR, and she has written for CNN.com, Earth Island Journal, Boom: A Journal of California, Yellowstone Discovery, Yosemite Journal, Darling, and Inspiring Generations: 150 Years, 150 Stories in Yosemite. She is the author of the novel “The Idea of Forever” and the official Junior Ranger Handbook for Yosemite. In February 2016, Beth gave a TEDx talk about P-22, the Hollywood mountain lion featured in her new book (https://www.youtube.com/watch?v=pMO8-°©‐f70nFY).

Although Beth travels extensively throughout California for her work, she makes her home outside of Yosemite, “her north star,” with her husband, four dogs, two cats, and the mountain lions, bears, foxes, frogs, and other wildlife that frequent her NWF Certified Wildlife Habitat backyard.