Keepers of the Flame: The Griffith J. Griffith Charitable Trust 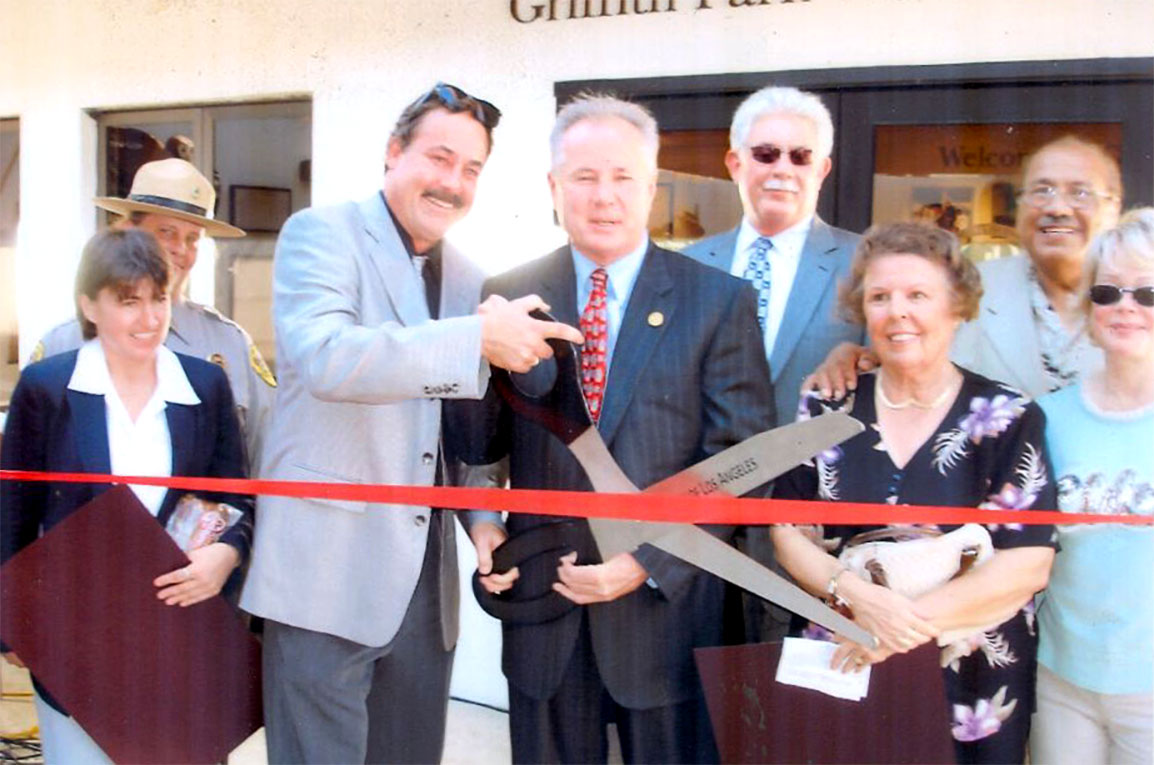 Visionary Stocking Stuffer
Griffith Park was born on December 16, 1896, when Colonel Griffith J. Griffith donated 3,015 of his Rancho Los Feliz acres to the city of Los Angeles for use as a public park. He “…generously filled the stocking of Los Angeles with his gift…its diversified acres, magnificent heights, picturesque roadways,” wrote Harris Newmark, a founder of the Los Angeles Library. Griffith’s “Christmas gift” (he later donated another 1,000 acres) came with his stipulation that “It be made a place of recreation and rest for the plain people.” Visionary in the booming Los Angeles of his day, the Colonel accurately predicted that the Park would become one of the country’s greatest, “a safety valve” from urban pressures, “open space—rustic and available to all.”

Keepers of the Flame
In his 1916 will, and concerned that his considerable wealth might be misused after his death, the Colonel established an Advisory Trust, naming as members his son, Van; his attorney, John T. Jones; and W.C. Mushet, a business friend. Aware that he might not live to realize his dream of an observatory on Mt. Hollywood and a Greek theatre, Griffith stipulated that Trust funds be used solely for their construction. Years of debate about logistics and legal and political wrangling followed his death in 1919. At one point, even the name of the observatory was in contention, but eventually Griffith’s dream became reality: the Greek Theatre was dedicated on September 25, 1930, and on May 13, 1935, the Griffith Observatory opened its doors.

While established specifically for the Observatory and the Greek, the Trust remained viable, with son Van ensuring it was used solely for projects true to the Colonel’s vision. Then, as now, Trust members have found it necessary to fend off efforts to commercialize the Park. They succeeded in retaining free admission, prevented unrestricted incursion of freeways, and defeated one of the more grotesque proposals, a gaudy commercialization of Mt. Hollywood.

The Gift that Keeps on Giving
The Griffith Charitable Trust, which devolved from the original 1916 trust, has, over more than 100 uninterrupted years, been helmed by three generations of the Griffith family—son Van, grandson Harold, and great grandson, Van. Each has been both guardian and advocate of their forebear’s vision, and has left his own individual legacy—no small feat, given that the 4,310-acre Park is the country’s largest urban park with a wildlife area, and is visited by some 10 million people a year.

Today, the Trust’s three members, great grandson Van Griffith; Clare Darden, retired graphic artist and ardent Park advocate who’s been hiking there since 1975; and Mike Eberts, author of Griffith Park: A Centennial History and Associate Professor of Mass Communications at Glendale Community College, advance an unbroken tradition as Park stewards. “We take our position as Trust members very seriously,” explains Darden. “We do the research and carefully determine the most important projects to donate to. As LA Recreation and Parks has a budget that only goes so far, so, to the extent possible, we fill in. We’re very cognizant of the difference in opinions that can occur,” she adds, “but we have a good relationship with Rec and Parks.”

Among the Trust’s accomplishments, two are conspicuous in their significance:

In 2008, Van Griffith led the Trust’s effort to nominate Griffith Park as an L.A. Historic-Cultural Monument.

Van Griffith, Darden and Eberts spoke to Col. Griffith’s wish that the Park be free, rustic and serve as a safety valve to city life. Eberts called it “sacred ground.” Darden agrees, adding, “It was the largest most gratifying project, having the entire Park become a cultural-historic monument.” Led by David Jones, the firm of ICF Jones and Stokes compiled a painstakingly detailed 321-page application, signed by Van and presented to the Office of Historic Preservation on May 15, 2008. It was championed by more than 50 civic and community organizations and individual supporters. Then-Park Superintendent Joe Salaices declared, “I think it’s our obligation, as a department and as a community, to commit to the continuation of Griffith Park. Forever.” And on January 27, 2009, the City Council voted unanimously to name Griffith Park L.A. Historic- Cultural Monument Number 942. “Hopefully,” said Van, “this will just add another layer of protection against development so that  future generations can enjoy the Park the way we all have.”

“The first project I got involved in after I became a Trust member in 1994, was the statue,” Darden relates. “Leading up to the Park’s 1996 Centennial, we realized there was no dedication to the man who’d given the city this extraordinary gift.” An earlier, small bust having been lost, Darden and then-Trust member, Marty Tregnan (Griffith Park Golf Historian), proposed a full-figure bronze statue. Well-known local sculptor Jonathan Bickart was hired, and RAP approvals and city permits were obtained as Bickart continued his meticulous work. The duly imposing statue was unveiled on November 23, 1996, with Van, Darden and Tregnan (who died in 1997) present. “It was a big deal,” recalls Darden. “City fathers attended, LAFD firemen with their big trucks, and of course the Rangers, along with local community members, plus lots of Park advocates.”

Friends in Deed
The Trust is a prime actor among the advocates who seek to preserve the equilibrium of the Park’s natural gifts, cultural venues and activities. Over its long history, it has enjoyed the support of many stakeholders—among them, homeowner associations, environmental organizations, individual advocates and Friends of Griffith Park. “The Griffith Trust is an amazing partner,” says Marian Dodge, FoGP board member and one of its founders. “They have always been there for the Park and have consistently defended Griffith’s vision of the Park as free respite from the pressures of urban life. The Trust has generously invested in and been outspoken supporters of projects that reflect a mutual desire to preserve, maintain and protect the Park. They are wonderful to work with.”

The two organizations work independent of one another, each with its own agenda and priorities. Says Darden, “We both benefit: we help them, they help us. Gerry, Marian, Mary Button and all the board and members… they really are a premier organization backing this Park.”

Given their shared commitment as Park stewards, the Trust and FoGP sometimes work hand-in-hand to support, defend, and occasionally oppose, issues of mutual concern. “I consider the relationship between the Trust and FoGP valuable not only for its support of the Colonel’s vision but for the ongoing efforts of the Trust,” says Eberts.

Since FoGP’s founding just 10 short years ago, this common purpose has resulted in a number of projects, among them: preventing a baseball field in Crystal Springs, because it required removal of many trees, including a heritage sycamore; and the Trust joined other funders to support FoGP’s years’-long efforts to revitalize Fern Dell, most recently the historic Pedestrian Bridge. Returning the entire Dell to its original rustic aesthetic is an arduous, detailed process, and its aspects ­and features areprioritized and dealt with individually.

“Fortunately, Colonel Griffith’s ambitious advocacy for the Park continues through his descendants and Griffith Charitable Trust members,” says FoGP president Gerry Hans. “Besides annual gifts for various projects, the Trust steers the Park in the right direction. Throughout the decades, attempts to deviate from the Colonel’s vision for the Park, or exploit it, were met with battles with the city, and sometimes lawsuits. This rightful tradition should continue. Friends of Griffith Park’s mission is squarely aligned with the motivation and intention of the Colonel’s great gift to the ‘plain people’ of Los Angeles.”

Minding the Future
It is to be hoped that Griffith Park will be preserved in accordance with Col. Griffith’s vision. The Park is not merely a gift of land, but a remarkable gift of nature’s bountiful flora and fauna, much of it unique to the area, some of it endangered—and all of it fragile. It is a place to connect with and learn about nature, to ride a bike, take a hike; ride a horse or ride the carousel, play tennis, play golf, go to a museum, attend a concert, visit the planets… or just have a picnic.

Many of the Park’s irreplaceable 4,000+ acres were created thousands of years ago. And since its inception, the essential, if fragile, balance between nature’s munificence and human activity has, pretty much, been maintained. “Balance” being the operative word. As the number of Park users grows, so, hopefully, will grow an awareness of just how precious it is. Easily taken for granted, the Park’s seeming endless space and natural gifts could just as readily become over-burdened by misguided endeavors that lack a sufficient view of its innate limitations that, once breached, cannot be mended.

As the Park approaches its 125th year, Griffith J. Griffith Charitable Trust members continue stewardship of what Darden calls, “…a gem in the middle of the city… a treasure. I’m optimistic,” she adds. “In the end, I think there are enough people who appreciate open spaces because, in today’s world, where else can they go to be quiet, to enjoy nature?”

On the occasion of the Park attaining LA Cultural-Historic Monument status, the Colonel’s great grandson Van declared, “I don’t know what the future would hold, but I hope the city respects that the Griffiths are still around, looking over their shoulder.”