A Look Back at Pioneering Park Rangers 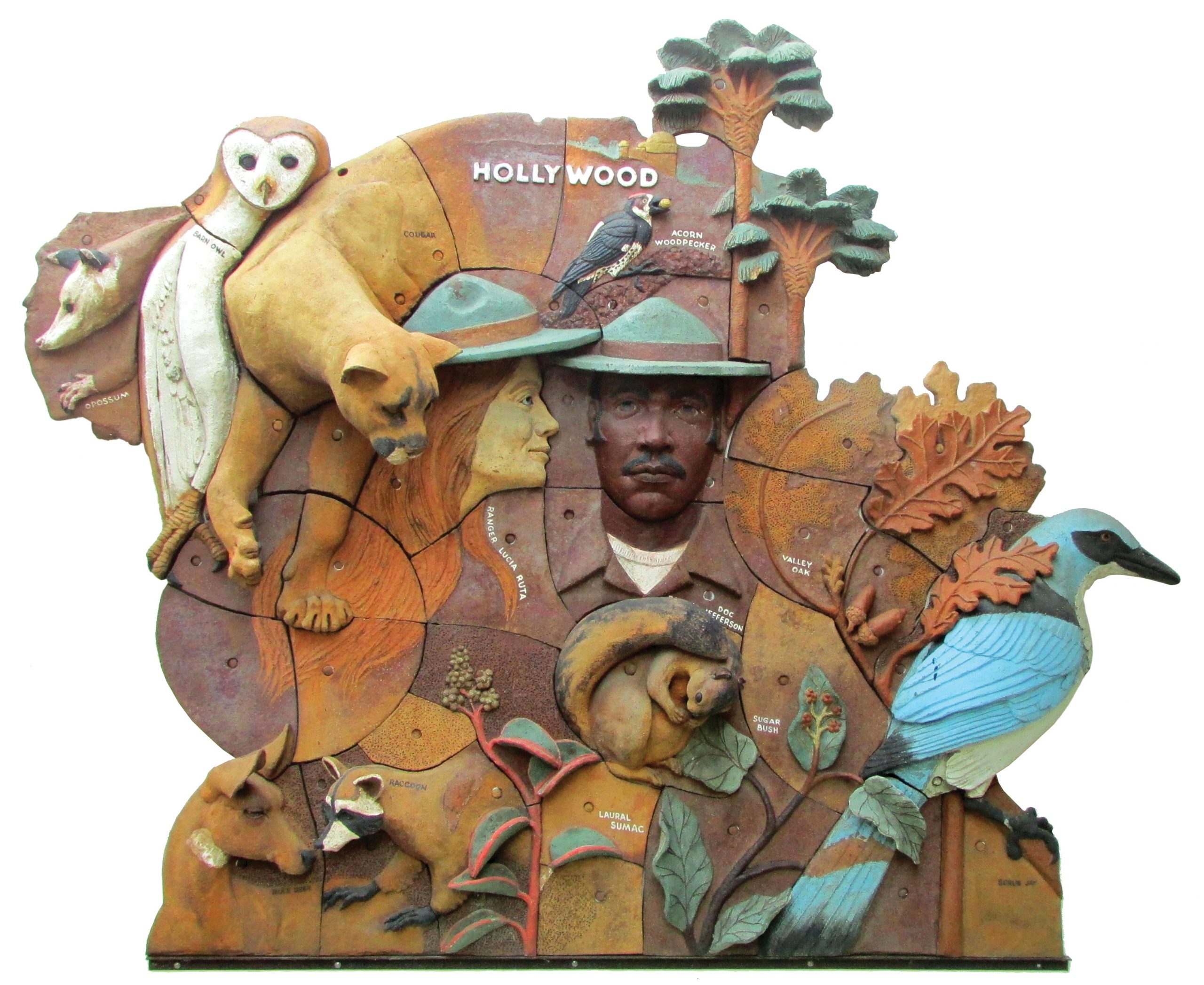 Have you ever studied the ceramic mural in the courtyard of the Visitor Center? The mural, designed and created by ceramic artist Elaine Katzer in 1987, gives a brief history of Griffith Park. In the final panel representing current times, Katzer chose two pioneering Rangers to represent the Park: Lucia Ruta, the first female Ranger, and Doc Jefferson, the first Black Mounted Ranger.

Doc Jefferson started his long career with the Department of Recreation and Parks (RAP) in the Maintenance Division in 1961. Originally assigned to the Commonwealth Nursery, Doc learned all about plants and the propagation of trees. At that time, the nursery supplied plants and flowers for city parks and city events. Doc delivered floral bouquets to City Hall, Pershing Square and city libraries. He helped develop the planting landscape at Hansen Dam, moved up the ranks and became a park maintenance supervisor.

Affirmative Action implemented in the early 1970s was aimed at hiring more minorities and women to fill RAP ranks. During that time, the Mounted Unit was also getting started and Doc was talked into applying. “They dragged me kicking and screaming into the program,” he recalls. “I was a city boy; I didn’t know anything about horses.” David Gonzalez, who later became Chief Ranger, trained six men and horses with the LAPD Mounted Unit on crowd control, how not to be spooked by loud noises, riding on sand at the beach, and riding in difficult mountain terrain.

Doc’s new partner was Big Red, a large chestnut quarter horse with a white face. The Mounted Unit patrolled the Park in pairs, accessing places where vehicles could not. Big Red learned how to pick his way carefully along ridges. This patrol checked out reports of smoke in the interior of the Park, performed rescues and general monitoring. At the time Rangers didn’t want to carry firearms; they were more nature-minded. Later, Doc worked full time in the film office issuing film permits.

Doc took the exam for assistant general manager and ranked fifth. As there were five positions open, he was sure he would get one. Lucia Ruta who ranked fourth was named Chief Ranger, a position she deserved. But Doc was passed over and was told “he didn’t write up enough people,” but he said “he never had any problems working with them so there was no need to write them up.”

Reflecting on the job of Mounted Ranger, Doc realized, “It was the best, most exciting job I ever had. I miss it.”

Lucia, a self-described party girl, left her home in Washington, DC seeking adventure in California. Her only skill was stenography. She held a number of jobs, but wasn’t happy being stuck in an office. Then she heard about the Comprehensive Employment Training Act (CETA), a program aimed at hiring women and minorities. It was the first time women could apply for jobs traditionally held by men. She applied with Animal Services and Park gardener/caretaker although she knew nothing about either. She was hired for the latter!

In 1975, Lucia was assigned to the Central Service Yard (CSY) to do roving landscape work. You had to be tough to survive because the supervisor made it clear he didn’t want women there; however they did want the money from the federal program.

While working in Fern Dell, Lucia met maintenance supervisor, Luis Ramos, who was aware of the sexual harassment she faced at CSY. Ramos treated her with respect and recognized she was a hard worker. He finagled a transfer for Lucia out of CSY.

Lucia worked in Fern Dell for a year raking the paths, pulling garbage out of the stream and cleaning restrooms. At the Ranger House she met one of the first Rangers, Bill Eckert, an expert horticulturalist who taught her all about plants.

Later Lucia went to Park Center as a gardener. She was up on a ladder pruning a tree when a Ranger rode by on a horse. It was Doc. Since they were at the same height, they struck up a conversation. Doc told her all about the Mounted Unit and how he had started in maintenance, too. He encouraged her to apply for the Mounted Unit. “I didn’t know someone would pay you to ride a horse in Griffith Park,” she exclaimed. Thanks to a chance meeting with Doc, she decided to stay with the City.

Lucia became a Senior Gardener and was responsible for training gardeners. Most of the trainees were getting out of jail. Even though she had 10 convicts working under her, she had none of the problems that some of the male trainers had with their men. She loved working outdoors. Lucia’s crew put in the landscaping at San Pasqual Park in East LA including installing the irrigation system for the ballfields. She told her crew that they could brag to their kids that they had built the park. She moved up to Maintenance Supervisor.

Meanwhile Lucia became active as a union organizer in the 1970s. She spent hundreds of volunteer hours helping city employees organize. “I was young, in my 20s, and indestructible,” she observed, “Boy, I had a lot of energy.” Doc described her slightly differently; “Lucia was spirited. She didn’t back down.”

At the end of the CETA program, the City had to place everyone, and since there were openings for Rangers, Lucia signed up. Lucia, Albert Torres and Tom Cotter all started in the program at the same time. Since early Park Rangers came from the maintenance section, most were Latino with a few Blacks. Lucia became a Ranger in 1984 and by 1987 was promoted to Chief Ranger. She was always lobbying for more Rangers and more funding because the City often cut funding to RAP and libraries whenever there was an economic downturn. One of Lucia’s hires was Ranger Anne Waisgerber who developed many materials to teach children about the Park and its plants and animals.

In the early 1990s several groups and Councilmember John Ferraro wanted to upgrade the Ranger position to peace officer status and give them guns. Lucia feared it would change the nature of the job. As Chief Ranger, she deliberately chose an abridged version of peace officer training at Rio Hondo College in 1989 so that trained Rangers wouldn’t leave for other law enforcement departments. Lucia firmly believed that Rangers should be the friendly face in the Park.

When the Northridge Earthquake struck in 1994, Lucia was in RAP Emergency Operations Division which sheltered victims in recreation centers for several months. Funding for a permanent Emergency Operations section failed to materialize, but the Department of Public Works asked her to head their emergency operations department. Lucia transferred to Public Works and spent the last 10 years of her career with the City in that capacity.

The two old friends Doc and Lucia met again in 2018 at a reunion for retired Rangers. Both enjoyed reminiscing with friends and renewing the Ranger camaraderie. Today, Doc lives in Corona to be closer to his children and grandchildren. Lucia moved back to her native Washington, DC.

Both Doc and Lucia played key roles in creating a robust and inclusive Ranger unit in Los Angeles – and we are grateful for their trailblazing service and talent!

← PREVIOUS ARTICLE NEXT ARTICLE →
← Keepers of the Flame: The Griffith J. Griffith Charitable Trust A Bird-Friendly Landscape, A Human Refuge →