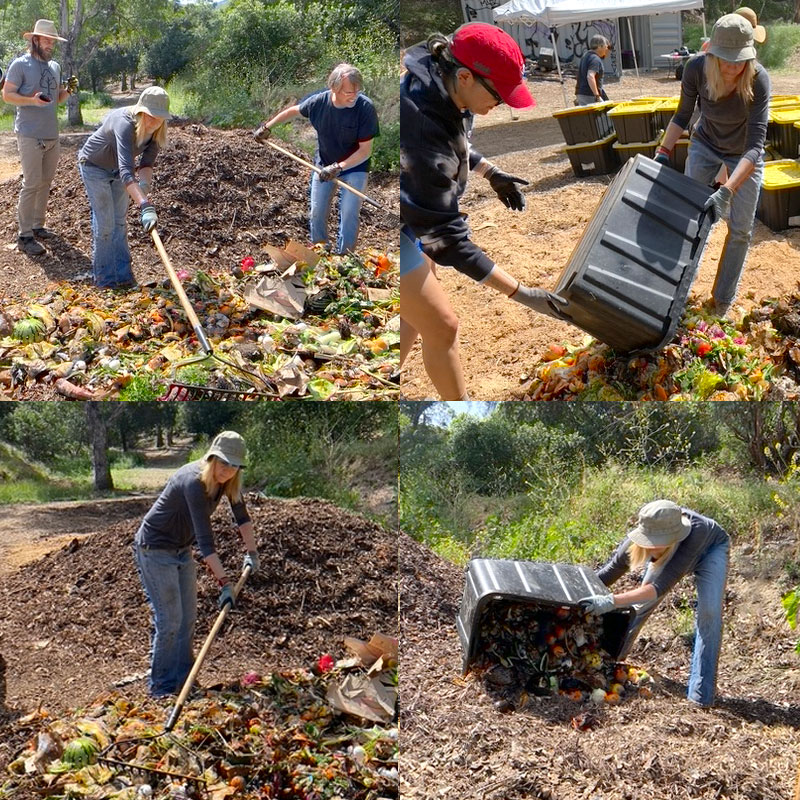 Seven months ago, Michael Martinez’ grand endeavor to spur the city of Los Angeles to locally recycle its food scraps added one more to its growing network of composting hubs. L.A. Compost, the brain-child of Martinez, has taken residency near the Griffith Park Merry-Go-Round and provides a working space where the public is invited to work in the muck and learn about the process of organic waste decomposing into soil.

LA Compost is a grassroots organization run mostly on volunteer power, focused on building community and public education. Every week more than 5,000 pounds of food waste is collected from local farmers’ markets and public donations; many of these contributions are made by apartment dwellers who don’t have access to green bins. Seasoned volunteers then build and maintain compost mounds; later the finished compost is offered back to the community. It is the second composting set-up to reside in Griffith Park.

The first, more established facility began in 1996 and is located at 5400 Griffith Park Drive. This facility, run by L.A. Sanitation, is a full-scale operation with heavy machinery as well as city money and resources behind it. As their webpage proudly boasts, “This facility and the recycling plant are the first of their kind in the United States.” Although both enterprises use the same simple process to create their compost, one major difference exists: the ingredients.

Instead of adding food waste to their compost piles, L.A. Sanitation utilizes “zoo doo,” (making good use of every contribution made by the L.A. Zoo’s four-footed friends), as well as “biosolids,” a.k.a. organic matter recycled from sewage. TOPGRO – the finished trademarked result – is then made available to all residents at their site.

For many years I’ve made good use of this compost facility located at the northern end of the Park. Shoveling up mulch for my home garden and scooping buckets of TOPGRO for my fruit trees. I would often gaze across the street and see the steam rising from the LASan facility and wonder “How does it all work?” Well, I got a chance to better understand composting when I recently volunteered at LA Compost.

Roll up Your Sleeves

I arrived onsite with other volunteers on a windy Sunday morning; we were enthusiastically greeted by event leader Kenny Derieg who pointed out the 20 or so bins of food waste collected from the Atwater Farmer’s Market. Here was our plan: create a “lasagna” design pouring tree/mulch matter over a layer of food waste, and dampening the pile as we worked.

Everyone had a task: tipping food waste on to the pile, raking the decomposing foods to create a flat-topped mound, wheel-barreling mulch, and cleaning and stacking the emptied containers. It was a well-oiled machine, owing in great part to the dedicated volunteers. It’s messy, smelly work but at one point after dumping a particularly heavy container and nearly tripping into the mess, I stepped back and observed, “It really is kind of beautiful!” Other volunteers, checking out the three-foot tall piles, agreed.

We finished our first batch in less than an hour and as we waited for the second delivery, Kenny gave us some composting facts. At a nearby mound, he stuck a giant thermometer in it, and dug a hole to show us decomposing black matter covered in a whitish ash.

Kenny explained that compost needs four ingredients: nitrogen, carbon, H20 and oxygen. Foodstuffs are rich in nitrogen while mulch (tree matter) supplies the needed carbon. Throughout the process, water must be added. The mass also needs to be exposed to the air which happens periodically when the raw materials are manually mixed. The temperature of a compost pile can reach a steamy 150 degrees as it decomposes. Once compost is properly cooked, which can take from three months to a year, it is “screened” to separate materials that have not fully decomposed from the good stuff that is ready to spread on the ground and fortify your garden.

Kenny continued to tell us how compost regenerates soil health as a natural fertilizer. He also described how mycelium (the whitish ash) breaks down food and plant matter to create a giant web-like network that allows plants and trees to communicate with each other, especially helping to route minerals and nutrients to those in need. As the afternoon wrapped up, there was a feeling of camaraderie and a shared sense of a job well done. We had made a giant stinky mess but one day it would metamorphose into a dark, rich soil nutrient.

I spoke later with Michael who relayed his enthusiasm at seeing his organization now working alongside the many diverse enterprises already operating within Griffith Park. “There are so many other incredible experiences here and we are excited to be a small part of the fabric of all that goes on in the Park,” he explained.

If you’re interested in gardening, community, science, environmental issues, problem-solving or are just a curious person, please consider signing up to volunteer some Sunday afternoon. Michael says that family-friendly events are planned soon where everyone can get their hands dirty. Take it from me, you will love it!

So what exactly is mycelium? According to the internet, mycelium refers to the fungus structure that branches into thread-like hyphae which can be found in and on soil.

photos: Anna gets the hang of working with compost and getting dirty!

← PREVIOUS ARTICLE
← Wildness in the Metropolitan Area: A Dream in Search of a Plan