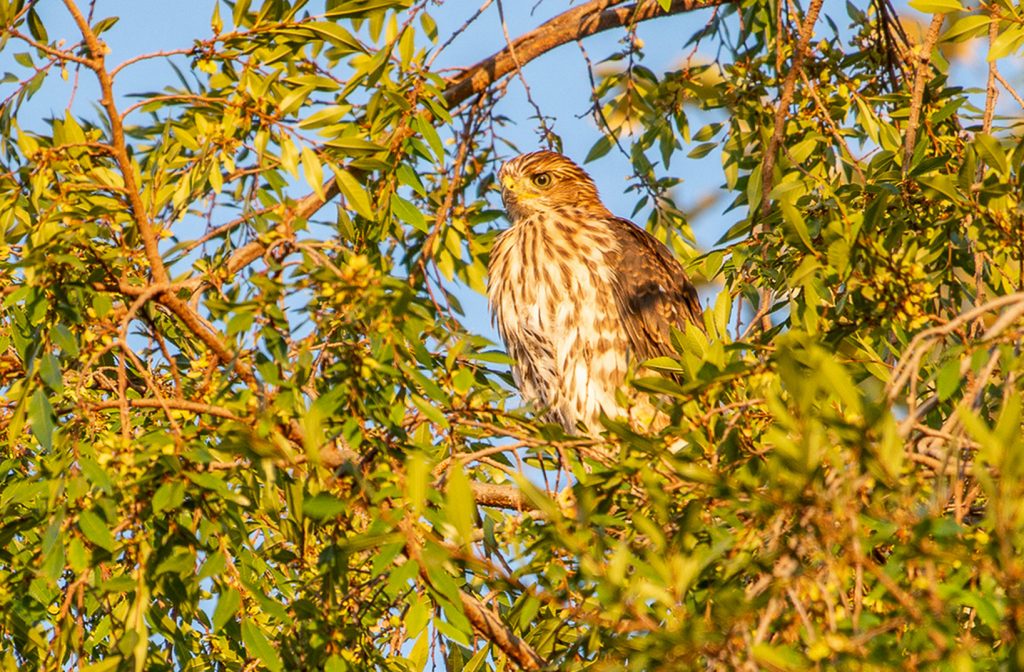 This was the second year of the Griffith Park Nesting Raptor Survey, and volunteer community scientists once again learned about and witnessed nesting raptor behavior in action as they provided important data during the 2018 nesting season.

Launched in 2017 in partnership with Friends of Griffith Park, the survey is an attempt to document and track each raptor nest in Griffith Park and the surrounding landscape. It’s the first specific, comprehensive dataset of an entire raptor community in the Los Angeles area.

Hawk species provide the ideal specimen as a focal point for the community science program because of their role within the larger urban Los Angeles environment. They are important apex predators in most of the Earth’s ecosystems, and coastal Southern California supports (or once supported) around a dozen breeding species. Of these, several are known to nest (or formerly nested) in Griffith Park.

For our second year, we again held two training sessions each attended by 40+volunteer community-scientists, and by the end of June, we had roughly 100 potential raptor nests/
territories located, with more than 50 of them becoming active during the spring. We then assigned nests to one or more volunteers based on their location preferences and birding ability. Volunteers were asked to visit their assigned nests at least twice a month to identify nesting stages throughout the season; they logged observations and sent back completed data sheets monthly.

The Study Area consists of Griffith Park, plus a large swath around it, including much of the Eastern Santa Monica Mountains, Elysian Park, Silver Lake, Echo Park, Debs Park, and more. The Study Area contains a large amount of private land, mainly occupied by single-family homes and yards with trees.

Cooper Ecological Monitoring conducted surveys during late winter to identify and map existing and potential raptor nests in Griffith Park and the surrounding areas as a Study Area. Based on prior records, the Study Area provides potentially suitable nesting habitat for resident raptors including turkey vulture, red-shouldered hawk, red-tailed hawk, Cooper’s hawk, great horned owl, barn owl, Western screech-owl, peregrine falcon and American kestrel. Former nesters, rare today in any season, include golden eagle and long-eared owl. Osprey are frequently seen through the nesting season – mainly along the Los Angeles River – but this raptor does not regularly nest in the Study Area.

Of the roughly 100 confirmed and potential raptor nests both years in the Study Area, we were able to locate and monitor roughly the same number which became active nests (49 in 2017, 55 in 2018), and of these, a similar proportion were confirmed or suspected as having fledged in both years (75-81% each year). Approximately 39 potential raptor nests (or non-breeding territories) were deemed inactive for 2018 (vs. 41 in 2017).

The species breakdown was also nearly identical in both years, though with more red-tails in 2018 (29 vs. 22), roughly equal numbers of Cooper’s hawks (16 vs. 17 nests), and numbers of red-shouldered hawk and great horned owl also similar both years, with four-six nests for each.

We again observed that the “native” interior of Griffith Park had relatively few raptor nests, but 2018 found multiple nests of various species in the “edge habitats” at the Park’s periphery including places like Fern Dell and the golf courses. Again, just a single raptor nest in the entire study was located in a native oak tree (a Cooper’s hawk in Fern Dell), confirming our suspicion in 2017 that this species is simply little-used by local raptors; ten nests (20%) were in sycamores (vs. five in 2017). Pines again represented a large percentage of the nest trees in the study, with 23 nests in pines in 2018 (vs. 22 in 2017).

Another well-used non-native, eucalyptus, accounted for 12 active nests in 2018, roughly the same as in 2017, when nine were in eucalyptus; sycamores supported few nests in 2018. The finding highlights the importance of very large, non-native trees in and around the Park many of which are the tallest trees around. They clearly provide excellent nesting opportunities to the local raptor community and have essentially outpaced native substrates. As in 2017, few raptor nests were among the many stick nests observed on transmission towers and other structures during the study; these seem to be the exclusive domain of the common raven.

Our 2018 survey allowed us to investigate patterns of nest re-use by species. Calculating re-usage is limited by the fact that we had incomplete information for many nests during both survey years. We found a 39% re-usage rate across all species (22 of 54 of the 2017 nests were re-used in 2018), and that red-tailed hawks maintain a higher-than-average rate (59%), meaning that more than half of red-tailed hawk nests found the first survey were also active the following year. The lowest fidelity of the four species was found in Cooper’s hawk (29% re-usage rate), meaning fewer than a third of Cooper’s hawks nests were re-used the following year. While the sample sizes were small, two of the seven great horned owl nests found in 2017 were active in 2018 (28%), and just one of the four red-shouldered hawk nests from 2017 was active in 2018 (25%).

The finding that nest re-use varied across species, with red-tailed hawk showing a much higher-than-average rate of re-use, is not surprising. It is the largest species, and constructs the largest, most elaborate nests, and is well-known for re-using these nests. The lower rates of re-use found in the other species, in particular the Cooper’s hawk, may either be an adaptation to varying conditions of urban life, or it may indicate the opposite – a vulnerability to loss of nest sites. Additional years of monitoring are needed to assess this, but preliminary analysis suggests that while Cooper’s hawks are increasing in the region, red-shouldered hawks may be declining, suggesting that the flexibility strategy may be working for one species (Cooper’s hawk) and not the other (red-shouldered hawk).

Anecdotally, two of the four red-shouldered hawk nests and three of seven great horned owl nests, from 2017, appear to have been blown out of their trees by high winds. And while great horned owls are still relatively common across the study area (the low numbers of nests reflect the difficulty of observing this largely nocturnal species), the red-shouldered hawk is rather scarce. Given these results, it would be helpful to learn if the various lost nesting species of the region, such as American kestrel, were similarly pushed from nest site to nest site until none remained.

Other interesting hypotheses are developing which need further study years and data collection to statistically support. Species-specific geographic nesting shifts and “pause breeding” may be strategies to maintain stable populations, at least for some species.

Looking ahead to 2019, we will continue investigating the nesting patterns of our urban raptors in and around Griffith Park. We are thankful for our partnership with Friends of Griffith Park and the wonderful volunteers who provided invaluable observations – and who also learned so much about these magnificent birds that live and thrive in our busy urban landscape. W
­
(Would you or someone you know be interested in participating in the 2019 Griffith Park Raptor Survey? Registration information will be announced in early January. Watch our website and follow us on Facebook for more details.)

The Next Generation of Environmental Stewards – Update

The first two recipients have received their scholarships and we all look forward to seeing their accomplishments in the future. Congratulations Katherine and Jaime! For the first time, Friends of Griffith Park will be offering scholarships to two students of...