The Storied History of Travel Town 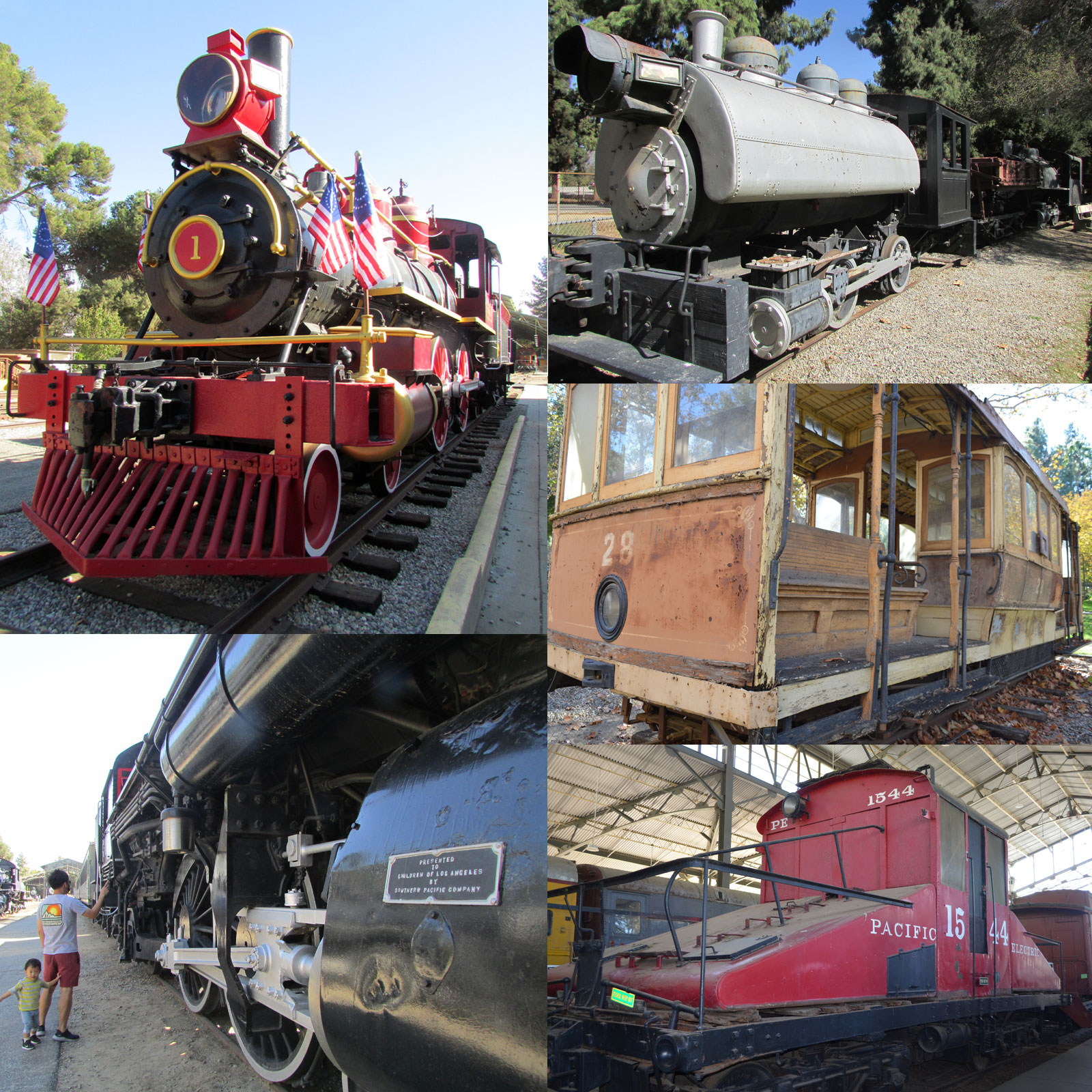 There are many terrific venues in Griffith Park and exhibits within venues. Travel Town is a perfect example; it’s a must-visit attraction, especially if you have kids. Or if you’re a big kid who loves all things trains and history!

At Travel Town, you can see and sometimes explore several of the various-use locomotives on display; a L.A. Railway Horse Drawn Car from 1880, a San Francisco Cable Car, and two locomotives from the L.A. Harbor Dept. that originally hauled quarry rock on Catalina Island. These little engines were saved from the scrap heap thanks to Travel Town’s founder, Charley Atkins who secured many of the locomotive wonders on display at this site.

Established in 1952, Atkins’ Travel Town serves as a reminder that travel across great distances used to be difficult and arduous; up until the 19th century, your choice of transportation was limited. You could walk, bump along in wagon trains or stagecoaches, or saddle up on horseback. Traveling from one coast to the other via ship, (navigating around the Cape of Good Horn) was a journey that could take months – even in good weather!

With the advent of trains, travel became easier and even elegant. Technological advances each year made trains more popular with businesses shuttling goods across the country, and passengers who had a desire for travel and exploration.

Travel Town pays tribute to train travel across the spectrum. You can visit passenger, dining and assorted-use boxcars from around the country, including several from Hawaii. The Oahu Railway cars #1 and #36 were donated to Travel Town in 1953. There’s a Southern Pacific Railway Post Office #12 built in 1890, plus a circa 1937 Union Pacific Dormitory/Club car currently undergoing restoration. Many of these locomotives and cars derive from the late 19th and early 20th centuries. It’s wonderful to see how well they hold up, despite age and exposure.

The oldest kid on the block is the Stockton Terminal & Eastern #1 locomotive built by Norris-Lancaster in 1864. This engine is proudly put on display for annual events like Depot Days and it always draws crowds of visitors curious to see how folks traveled “back in the days.” 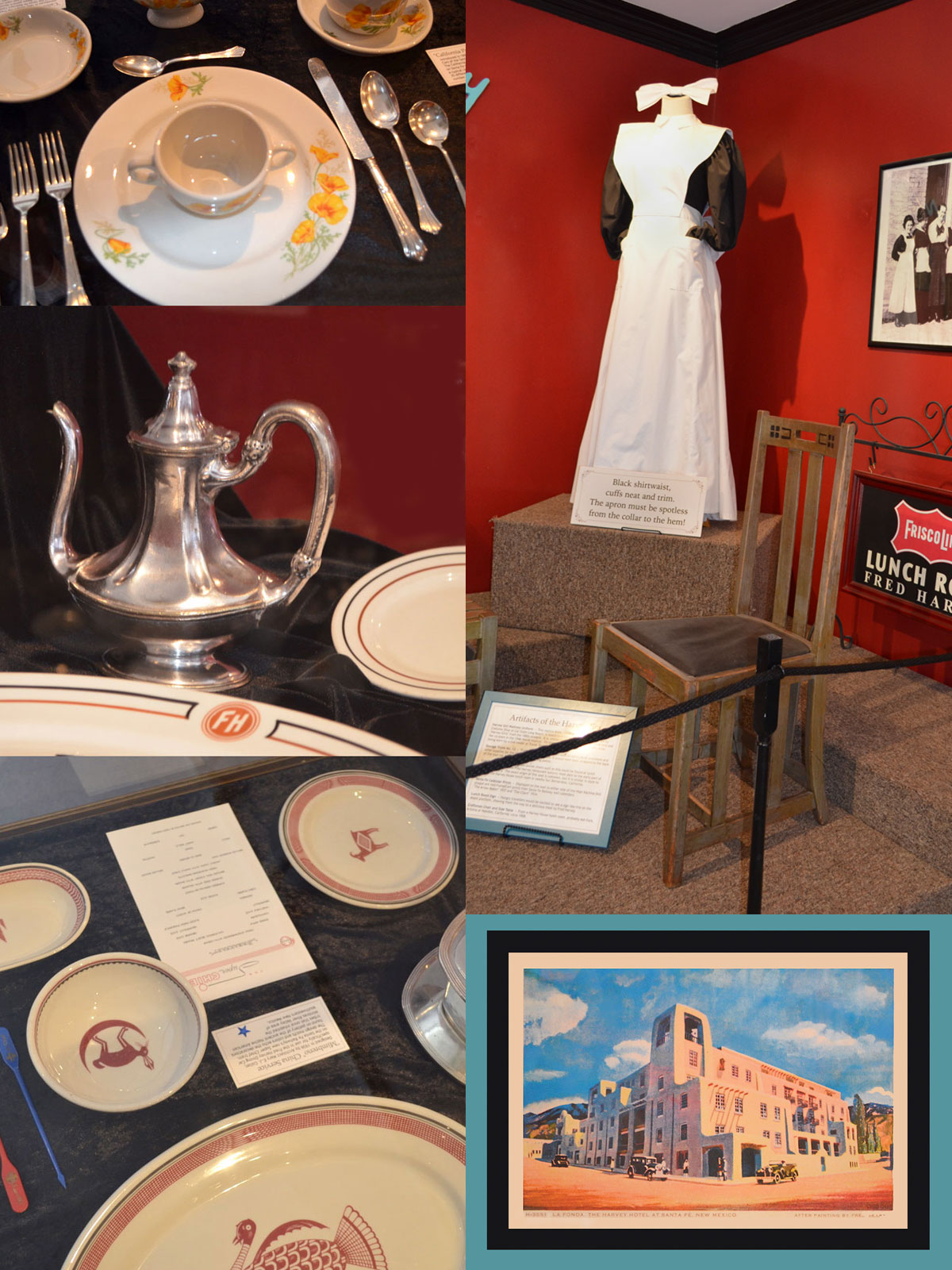 Tucked among Travel Town’s behemoths from long ago, you’ll find an innocuous little building that houses the delightful Fred Harvey exhibit. Have you ever seen the 1946 movie The Harvey Girls starring Judy Garland and Angela Lansbury? The film tells how in the 1880s, restaurateur Fred Harvey established the first restaurant ‘chain” and changed the way America ate, especially those in transit along the Atchison, Topeka & Santa Fe Railway.

Harvey recognized railroads were quickly drawing the coasts closer together, but that travel was missing a major component — feeding passengers en route. While passengers could find food in small towns, it was an iffy proposition since there were no set standards from town to town. There was also the problem of getting passengers back on board so trains continued to run on time.

Through careful planning and execution, Harvey established Harvey Houses across  America. Taking orders from menus on trains, and transmitting those orders in advance of the next stop, Harvey solved a huge problem for weary, hungry travelers — finding a decent meal. His wait-staff efficiently fed customers and got them on their way expeditiously.

Even better — Harvey “girls” were recruited from among young, attractive, hardworking women around the country, and were expected to comport themselves tastefully and civilly; highly unusual in the Wild West anything goes mentality of the late 19th century. 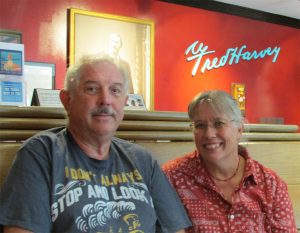 This small exhibit at Travel Town is a labor of love and includes artifacts that would have been used or seen along the route: place servings and silverware from Harvey Houses, glasses, menus, signage, seating from restaurants, and even a replicated Harvey girl uniform. Greg Gneier started collecting as a teenager and over the years has added various pieces. He takes great pride in showing off his collection which includes a trunk from one of the hotels to bottles carried aboard some of the trains, and a seltzer bottle from the El Tovar emblazoned with the Fred Harvey signature.

Finally, I was surprised to learn that architect Mary E. J. Colter was hired in 1910 as the architect/decorator for the Fred Harvey Company. At the time, she was one of only a few female architects working in the U.S. She was well-known for blending Spanish Colonial with Mission Revival — sprinkling in Native American and Rustic elements for good measure. Colter’s remarkable, extensive career included 21 projects for Harvey as well as projects in the ever-expanding National Park system.

Travel Town and the Fred Harvey exhibit are two “Don’t Miss” places to visit and linger in Griffith Park.

Currently the Fred Harvey exhibit and all Travel Town interior exhibits (including trains) are closed to the public. Unfortunately these exhibits will remain shuttered for the immediate future, but please keep checking back.
More on the Travel Town Museum can be found here.

Fred Harvey photos:
Top/left: Fred Harvey’s dainty Poppy place setting
Center/left: One of Greg’s favorites (and oldest piece) is the silver tea pot. The place setting carries the Fred Harvey insignia.
Bottom/left: Southwest Native American motif graces these place settings
Top/right: One of the signature uniforms (reproduction) worn by a Harvey girl. The placard spells it out – “The apron must be spotless from the collar to the hem.”
Bottom/right: Reproduction postcard of La Fonda Hotel/Restaurant in New Mexico. The back of the postcard would have held a description “Among La Fonda’s many attractions are its sunny patio; the restful lounge with its huge fireplace and deep-cushioned chairs; the New Mexican Room (restaurant); La Cantina (cocktail room); La Placita (outdoor dining room); and the famous orchestra from Old Mexico.”

Photo of Greg and Nancy Gneier at the Fred Harvey Exhibit
All photos: Kathryn Louyse