Grab the Brass Ring on the Griffith Park Merry-Go-Round

Who can resist the cheerful sound of a merry-go-round? The enthusiastic melodies have been attracting both children and adults for decades. Its siren call lures us back to childhoods full of carefree fun and play. 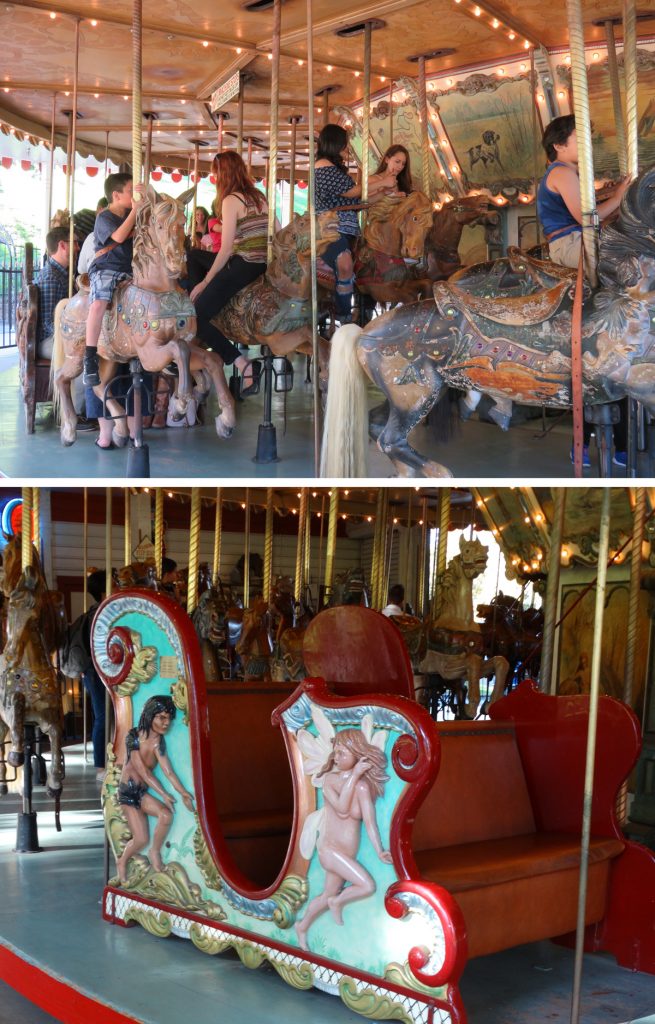 The unmistakable voice of the merry-go-round comes from its band organ concealed behind the beautifully carved hand-painted wooden cabinet in the back. The images of nature, goddesses, and angels hide the magnificent machine that makes the music. The organ could be considered an early example of musical technology.

Violins, horns, drums, xylophones, and bells are played by pneumatics where individual bellows operated by a central air pump play the instruments. The melody is controlled by a big piano roll like a player piano. Griffith Park’s Stinson 165 Military Band Organ is said to be the largest carousel band organ in the West with a repertoire of more than 1500 marches and waltzes.

The current four-abreast merry-go-round arrived in 1937. It’s one of the largest Spillman merry-go-rounds with 68 horses and two chariots and a seating capacity of 80. It came with an impressive résumé. Manufactured by the well known company Spillman, it was purchased by the Spreckels family (of Spreckels Sugar fame) in 1926 for Mission Beach Park in San Diego. It enchanted children in San Diego Expo from 1933-1935. Then Ross Davis, an agent for the Spillman company, bought it for himself and moved it to Griffith Park in 1937.

Originally only protected from the elements and vandals by heavy canvas, the merry-go-round began to suffer. After the death of Ross Davis it was operated by Don Rand and Ed Openshaw in 1976. They painted and varnished and added wrought iron fencing. In 1980 they added the pillars and wrought iron fencing that surround the merry-go-round today. They reconditioned the old band organ to restore its hearty sound.

The merry-go-round has been a popular location for movies, TV and commercial filming. It was in Mel Brook’s “Silent Movie”,  “Twins”, “Barnaby Jones”, “Charlie’s Angels”, “Police Woman”, “The Mentalist”, and even had a minor role in a commercial for McDonald’s hamburgers.

The years have not been kind to the merry-go-round. It was looking faded and forlorn until Jeff Brown, a teacher and merry-go-round aficionado, stepped in to help. Jeff registered as an official park volunteer and with the blessing of the Office of Historic Resources has been painting the structure around the merry-go-round. The wrought iron fencing now has a fresh coat of black paint. The finials shine with a coat of gold leaf. Thank you, Jeff!

Today children and adults alike are still drawn to the enticing sounds of the merry-go-round. You’ll find them lining up to get in and racing to find their favorite horse. Alas, inflation has hit here too. The ticket that used to cost a nickel jumped to a quarter in 1951; by the 1980s it was 50 cents. Now a ride costs $2.00, well worth it to be a blissful child again for a few minutes.