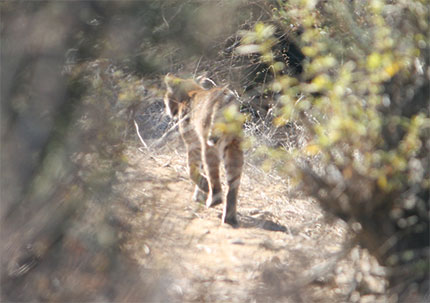 California Department of Fish and Wildlife will no longer issue commercial permits to trap and kill bobcats after a hold-your-breath 3 to 2 vote was taken by the agency’s Commission in August in favor of a total trapping ban. With the spotted pelts of bobcats going for upwards of a $1,000, and wild game trapping entrenched as a Western frontier sport, this was not an easy win. Persistent advocates convinced the Commission with thousands of letters citing animal rights, as well as solid natural science arguments.

Friends of Griffith Park, armed with first-hand experience with bobcats in Griffith Park and its own scientific advisory team, argued that harvesting bobcats potentially endangers the genetic health of populations. While populations may recover after depletions within allowed trapping areas, the composition of the gene pool may become shallow. This is especially important when other stressors, such as drought, rodenticide poisoning and freeway road kill have become more prevalent in recent decades. Friends of Griffith Park also argued that commercial trapping may be occurring more at periphery areas where wildlife connectivity to other areas is most critical for genetic variability.

Commercial trapping in not an issue in Griffith Park or in other Santa Monica Mountains wilderness areas, but the species’ health needs to be looked at on a global basis. The public’s support for this statewide ban completely dwarfed those who wanted to continue the practice which involves about one hundred trappers. Again, California sets a standard for the rest of the country to follow.

More information can be found on the KCET website… http://www.kcet.org/news/redefine/rewild/commentary/bobcat-trapping-ban-finally-official.html?utm_source=facebook&utm_medium=social&utm_campaign=redefine