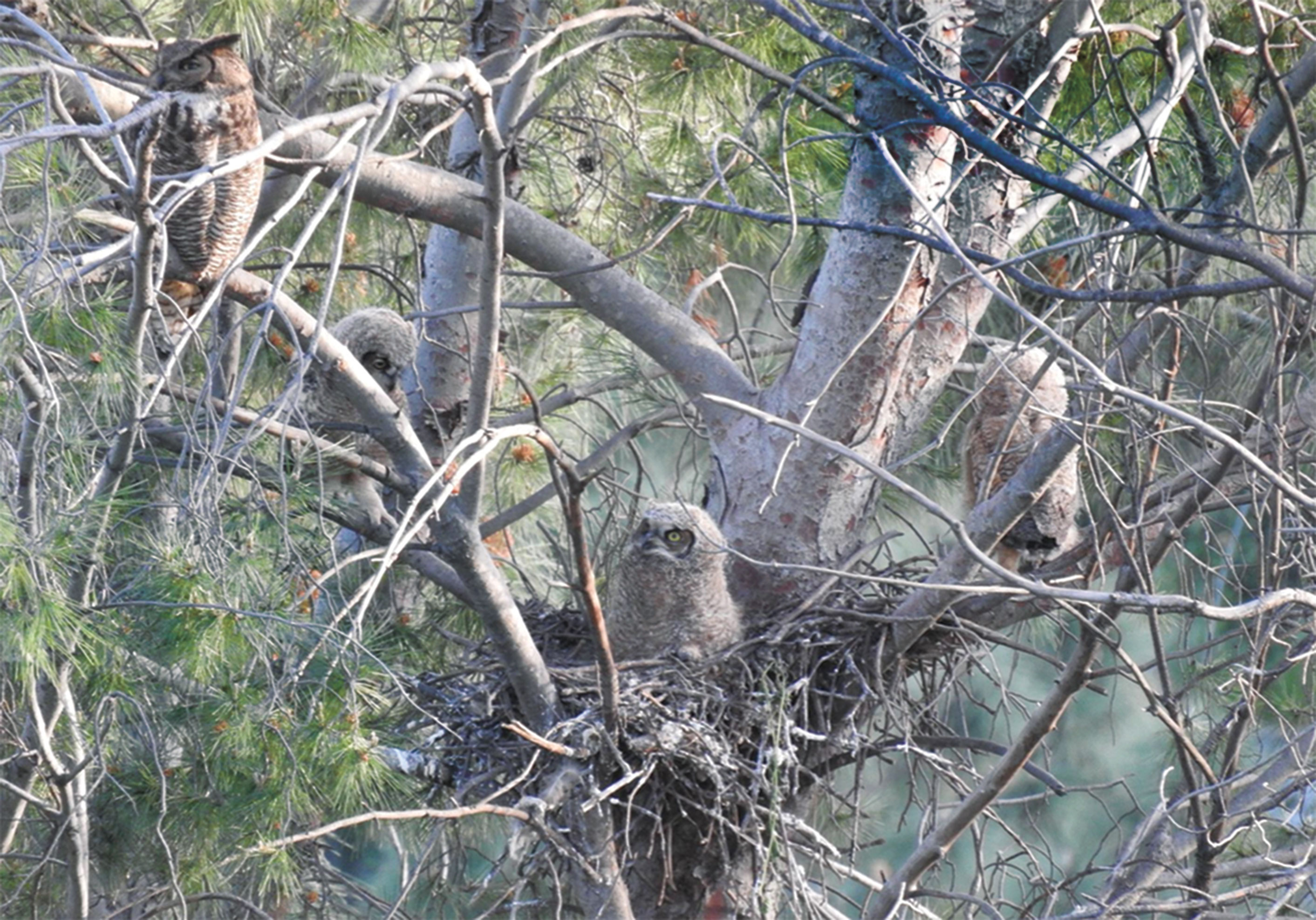 If you’re often in Griffith Park, you may have witnessed individuals looking intently toward the skies and treetops last spring, and not realized these were among the 75 volunteers who participated in the 2019 Griffith Park Raptor Survey.

Since 2017, more than 200 potential raptor nests have been found in and around Griffith Park. Along with volunteers, we increased the number of monitored nests from 54 in 2018 to 60 during the 2019 season. Of the 60 active nests, approximately 87% (or 51 nests) were successful and fledged young.

One of the survey’s goals is to understand how local wildlife use resources in Griffith Park and the nearby area. Griffith Park sits at the eastern-most edge of the Santa Monica Mountain range and is surrounded by three major freeways and dense urban development. Still, the Park boasts a large and vibrant wildlife population that includes both diurnal and nocturnal birds of prey.

The Park has many large, planted and native trees in the developed areas including the golf courses, the L.A. Zoo, and Greek Theatre. Data collected on tree species found that the large, often non-native, trees (various pine and eucalyptus species) planted years ago provide important nesting habitat for our local raptor species. Often, they are the largest and most stable trees in the area, making them ideal locations for species such as the red-tailed hawk. As in prior years, just a single raptor nest in the entire study was located in a native oak tree, confirming our previous suspicion that this tree species is now simply little-used by our local urban-dwelling raptors. However, both developed and non-developed portions of Griffith Park provide important foraging habitat for many raptor species in and around the Park boundaries.

The finding that site fidelity varied across species, with red-tailed hawks showing a much higher-than-average rate of re-use, was not surprising. This is the largest species, and it constructs the largest, most elaborate nest, and is well known for re-using their nests.

The lower rates of re-use found in the other species, in particular the Cooper’s hawks, may either be an adaptation to varying conditions of “urban life”, or it may indicate the opposite – a vulnerability to loss of nest sites. Given how common Cooper’s hawks remain in the study area, we suspect it to be the former, that flexibility in nest site choice is one factor that enables this species to thrive.

The inclement weather we had this past season had an apparent effect on nesting raptors around Griffith Park, suggesting that heavy rains prolonged the nesting season. The year of the project launch (2017) followed an exceptional four-year drought in the Los Angeles area; however, the 2018 – 2019 rainy season saw a total of 18.82 inches in the downtown Los Angeles area, which is 4.09 inches (>20%) above the seasonal average for the area. In turn, the raptors delayed their nesting by a few weeks to a month. In the survey area, red-tailed hawks usually start incubating around mid-February but during the 2019 season they did not begin incubating until the first or second week of March.

An incredible amount of effort went into the survey, for which great strides have been made in utilizing the data collected to protect our local raptor species. Survey volunteers conducted much of the fieldwork, and provided invaluable ecological information that would have been otherwise difficult to obtain.

The vision and support of Friends of Griffith Park continues to propel this study forward into great, new directions. We look forward to having many more volunteers joining us for the 2020 season!

← PREVIOUS ARTICLE NEXT ARTICLE →
← FoGP Celebrates a Decade of Service, Advocacy and Action A Tale of Two Rabbits →