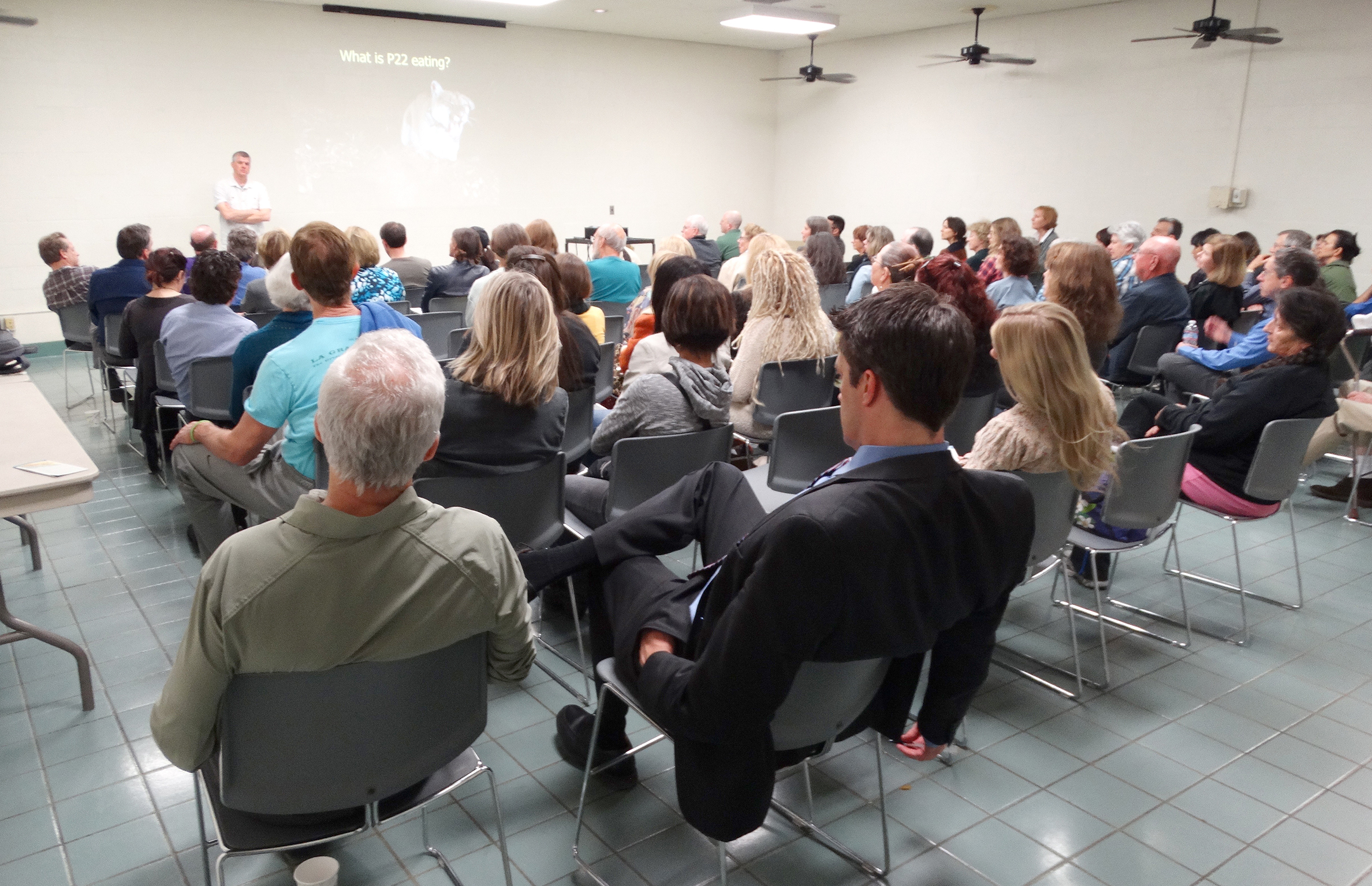 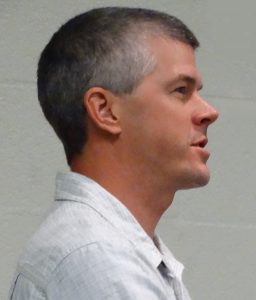 Jeff Sikich knows mountain lion P-22 better than anyone. He first captured P-22 in March 2012 in order to place a radio collar on him shortly after a remote camera trap snapped a totally unexpected image of this mountain lion. The cameras were part of the Griffith Park Connectivity Study, supported by Friends of Griffith Park. In the four and a half years P-22 has lived in Griffith Park, Jeff has recaptured him several times to either replace collar batteries or to treat him for sickness due to rodenticide poisoning.

Sikich is a wildlife biologist with the National Park Service (NPS). The Santa Monica Mountains is his home range, as NPS has been following mountain lions here for twelve years. However, Jeff has an international reputation for humane trapping, so he has flown all over the world to work with over sixteen carnivore species, including tigers, jaguars, and leopards.

Jeff’s talk described what has been learned from years of research in the Los Angeles area. As he unfolded the family tree of mountain lion populations in the Santa Monica Mountains, it was easy for all attendees to understand how limited genetic variability is a problem, largely due to habitat fragmentation and virtual impasses to other far-reaching habitat zones. Inbreeding has become more prevalent and our mountain lion population may well be on the verge of a more weakened and unhealthy state. On the positive side, there are strong lobbying efforts for the first man-made wildlife bridge in Southern California, over I-101 at Liberty Canyon in Agoura Hills.

As we know, there is at least some connectivity to Griffith Park across Cahuenga Pass. P-22 proved it when he made the journey across two freeways (I-405 and US-101) into the Park. Also, various wildlife species have been photographed crossing these overpasses. What makes this highly restrictive linkage attractive to wildlife is that there are large chunks of habitat on both sides which helps funnel animals to the choke points where they cross.

Jeff also spoke of other urban challenges to mountain lions and wildlife in general. In addition to shrinking habitat, vehicle-rated mortality is high. The rodenticides (rat poisons) issue is pervasive. Three local mountain lions were confirmed casualties of these agents which travel up the food chain. We also know that P-22 was a near victim of Diphacinone, an anticoagulant rodenticide, which probably occurred when P-22 ingested a poisoned coyote, raccoon or other mammal.

We were very fortunate to have Jeff spend time with us with an over-capacity audience. The public is much more comfortable living with wildlife – big wildlife – when scientific expertise is available. The question and answer period could have been endless! 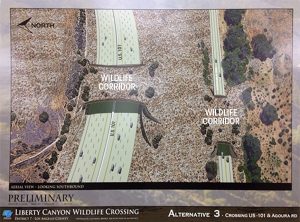 As vast numbers of animals continue to perish in vehicle-related collisions, proposals to create wildlife corridors across freeways will hopefully reduce this number. Liberty Canyon is one of the proposed sites as one of the last large undeveloped areas along the 101-freeway and when completed, the crossing will be the largest wildlife crossing in the world. For more information: http://www.nwf.org/Save-LA-Cougars/Wildlife-Crossing.aspx

← PREVIOUS ARTICLE NEXT ARTICLE →
← Who Owns Wildlife? Law and the Birth of the Preservation Movement A Bridge Not Far →