More on Rodenticides in Parkland 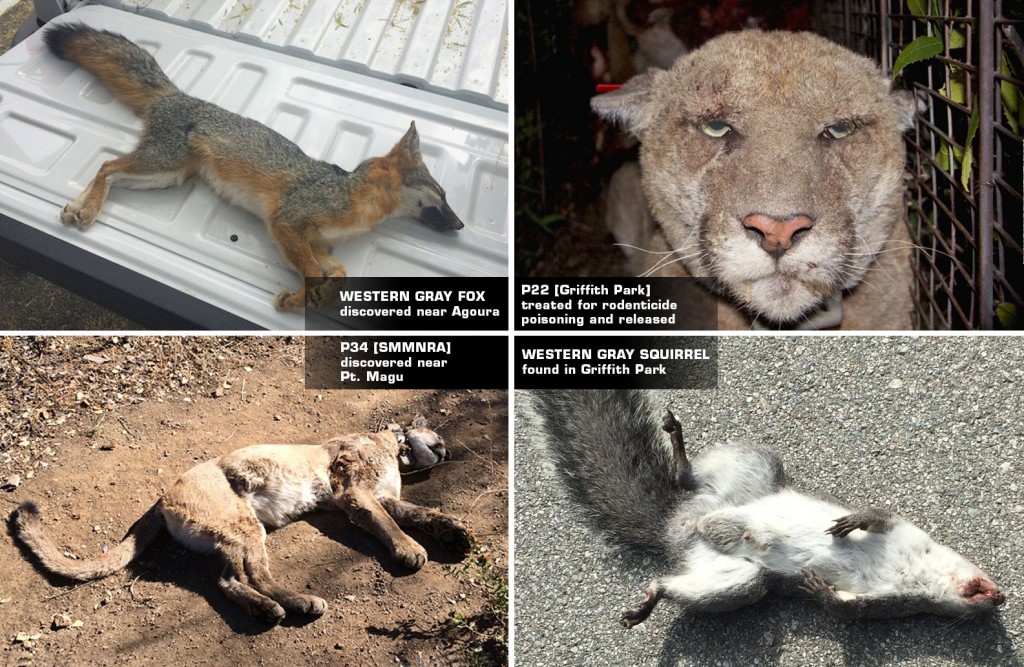 Photos of Western Gray Fox, P22 and P34 are courtesy of the National Park Service

While the City of Los Angeles grapples with phasing out all rodenticide use, these dangerous substances continue to find their way into Los Angeles parks. Friends of Griffith Park, along with other organizations, have spoken before packed City Council committee hearings looking into viable alternatives. Thus far, we’ve seen little progress on this issue. Yet rodenticides are continuing to wreck havoc and unfortunately wildlife is already challenged enough by the drought and habitat fragmentation!

You may have read that a young mountain lion – P34 – succumbed to rat poisoning near Malibu this past October. Also, a Western Gray Fox was found dead in the Santa Monica Mountains in September, and a necropsy found the cause of death appeared to be anticoagulant rodenticides, since there was internal bleeding with no apparent trauma.

We’re experiencing the same problems here in Griffith Park. Recently a dead Western Gray Squirrel, our native tree squirrel, was discovered near the Fern Dell area. At first glance it looked like road kill since it was on the side of Western Canyon Road. However, there were no visible signs of trauma.

Friends of Griffith Park recently funded a gray squirrel genetic study being conducted by CSULA graduate student, Chris DeMarco. Knowing that he could use some of the squirrel for its genetic material, the squirrel was collected with the permission of Park Rangers and shipped off to be sampled. Upon receipt of the material, Chris encouraged us to invest in an analysis for the presence of rodenticides by sending a liver tissue sample to UC Davis Veterinary laboratory. The results came back: positive for first generation rodenticide, Diphacinone.

Diphacinone has been the most frequently detected compound found in bobcat blood samples during past studies which involved about two hundred bobcats in the Santa Monica Mountains, including Griffith Park. It was also one of the two rodenticides compounds detected in P22 when he was found sickened in 2014. (He has since recovered).

While we cannot definitively say this Western Gray Squirrel’s cause of death was due to rodenticide poisoning, the presence in gray squirrels further enlightens us all to the serious nature of the unintentional poisoning of the wild. FoGP believes that elimination of the use of rodenticides needs to become a priority for Los Angeles City, Rec and Parks, and residents near any wildlife habitat areas.

This past July, environmental activists waited for a follow-up presentation at the Arts, Parks and River Committee on rodenticide use in city parks. To date, the committee agenda has not mentioned any findings, alternatives or when this topic might be presented, even though concerns of rodenticide use in the Park continue to grow among concerned citizens.

The clock is ticking. Wildlife in the Park continues to sicken and die from anticoagulant rodenticide poisoning.

Some helpful tips to help reduce rodents around your home: