Folk Gardens in Griffith Park and Remembrances of the Captain 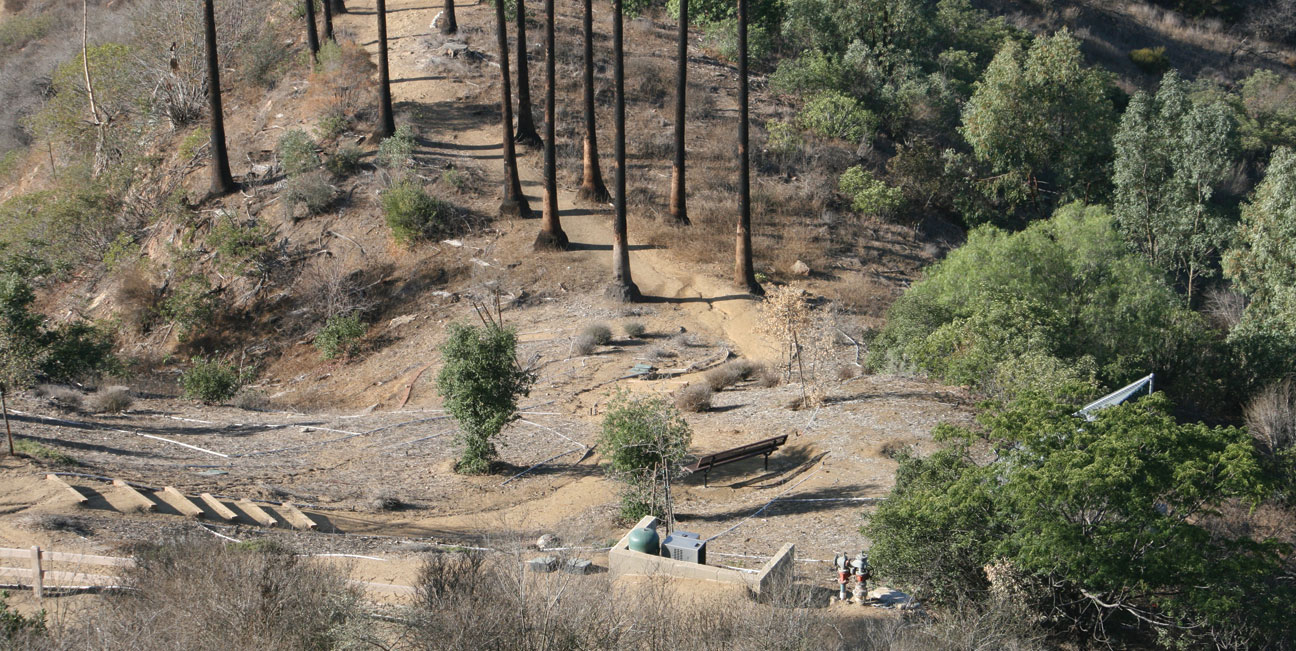 Folk gardens in Griffith Park were established by three separate men in the 1940s. Captain’s Roost is the oldest, followed by Dante’s View and then Amir’s Garden. Building these tranquil gardens became their passion.

I first met the “Captain,” who ruled his “Roost” on the west-facing slope of Mt. Hollywood, in 1946. He seemed ancient, but perhaps this is because I was a mere child. Captain’s Roost became a lush garden, but the fierce fire in May 2007 turned it into a barren, semi-inhospitable place, much as I remember it when I first hiked the area over sixty years ago.

The Captain was a shirtless, grumpy man in shorts, who wore a captain-type cap. He had leathery skin which had tanned to a golden brown. He did not talk much. He wanted to be left alone to work this sparse plot of land. Perhaps he once was an official captain. As a child, I didn’t care. I just wanted to walk up the gigantic hill th­at led to his outpost and sit on the tiny, wooden bench he had handcrafted or the dirt seat he had carved into the hillside.

My family, (Mom, Dad, my sister Joan and I) would approach his garden from the Bird Sanctuary. He never greeted us. Mom always said hello; his response was an indifferent grunt. We were often the only ones at his Roost, but occasionally a few other hikers stopped by on their way to the summit of Mt. Hollywood.

The Captain noticed I was extremely skinny, which was of grave concern to my mom. He witnessed me turn down the sandwiches she packed, and he begged me to eat. One day he suggested to Mom I might be tubular. The following morning I was rushed to get a chest X-ray which proved negative. The next time we visited the Roost, Mom made a special effort to let the Captain know I was in perfect health.

I returned to the spot several years later while I attended college. The Captain was gone, but the area had blossomed with plants. A real bench was in place. It had become a gathering place for middle-aged and elderly Europeans. Some were German-Jewish refugees. They were friendly and I enjoyed being among them.

One woman, Rae Pivnik, later became semi-famous as the next caretaker of Captain’s Roost. Mrs. Pivnik was once featured on a TV newscast. The gist was to document how this woman, over 80 years old, came to the Roost every day to take care of it. I never saw her do any gardening, instead she supervised others. She sat on a bench, bundled in a coat, and wore a small hat as she gave her orders. The true caretaker of Captain’s Roost was Dante Orgolini, a man decades younger than Mrs. Pivnik. He did most of the planting and weeding.

The older Mrs. Pivnik got, the crankier she became. She was very territorial and often snapped at hikers. Mrs. Pivnik did not faze my mother, who often visited Captain’s Roost during the week. One day Mom and Mrs. Pivnik sat on the bench while Dante feverishly worked. Mrs. Pivnik was in a particularly nasty mood. She constantly berated and criticized Dante. He finally stood up, threw his trowel down on the ground and said, “Okay, you can have this place for yourself. You will not see me again.” Then he left.

That is how Dante’s View was started. Dante went to the other side of the hilly slope and created a spot which was his labor of love. He raised the American flag at the entrance, as a signal he was in his garden. He made it very clear everyone was welcome, possibly as an antidote to the unpleasantness that had developed at Captain’s Roost.

Dedicated caretakers have carried on tending these folk gardens. Friends of Griffith Park boardmember Felix Martinez took care of Captain’s Roost several years prior to the 2007 fire. After the near total denuding from the fire, Department of Recreation and Parks made a failed attempt three years ago to reestablish Captain’s Roost. The area remains sadly barren and unattractive, with virtually no shade, and no water fountain. Exposed PVC water lines litter the area leading to the downhill ridge in glaring incongruity with the natural surroundings. Non-native areas such as these folk gardens are hard pressed to recover from fire, compared to native habitat. FoGP hopes to work with Rec and Parks at Captain’s Roost in the near future with a goal to plant the area with climate-tolerant native flora.

~ Author Carol Brusha is a long time park user and strong environmental advocate. She is also a Friends of Griffith Park board member.