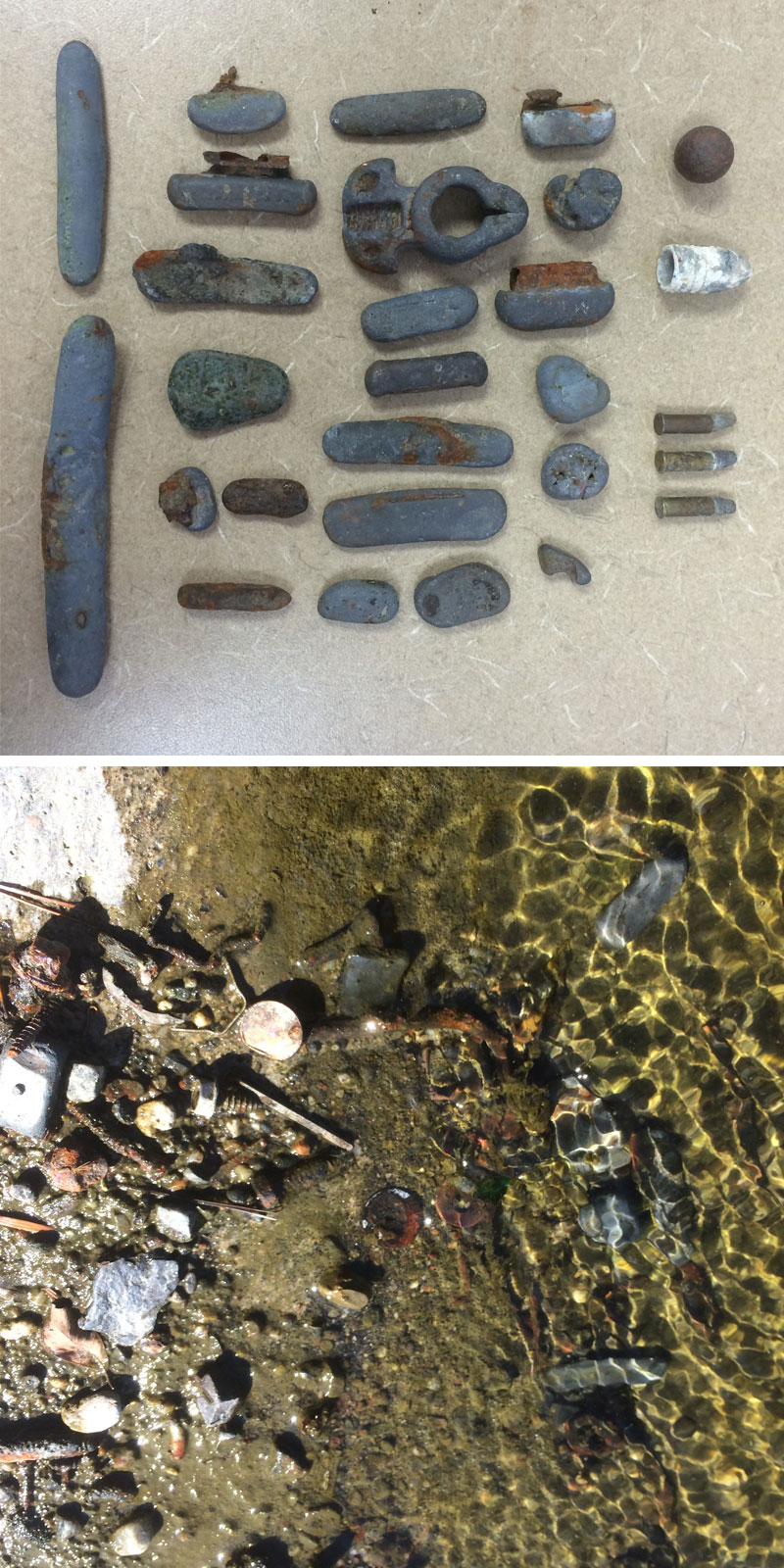 Top photo: The Los Angeles River presents a wide assortment of cultural debris along its margins— some of which is toxic e.g., lead wheel weights. Bottom photo: Small group of lead wheel weights collected recently by the author under the I-5 bridge over the LA River. Collection includes a battery terminal and .22 bullets. Genuine 19th century iron musket ball and lead “minié ball” shown at upper right for comparison only. The author was able to collect about a pound of lead debris while walking along the edge of the L.A. River in just a few minutes.

“Look at these,” said a volunteer at a recent FOLAR clean-up hosted by Friends of Griffith Park. He held out a handful of what looked like musket balls—nice, round lead balls and told us he found them in the river bed. Thinking that stray musket and minié-balls must be lying around the river bed waiting for urban archeologists to discover, FoGP board member, Kathryn Louyse, and I went looking for some more. What we found was intriguing: lead balls and blobs of all descriptions—all wonderfully tumble-smoothed by decades of washing by the Los Angeles River and its gravel. I immediately recognized what the “musket balls” were: tumble-polished lead wheel weights in abundance in the shallow shoals of the river bottom. The L.A. River, it seems, is not just lined in concrete, it’s also lined with lead!

The idea that so much lead exists in our major local waterway began to weigh upon me, too. Why is lead so bad for living organisms? Lead is one of the most studied of toxins. No level of lead is beneficial to the human body. It can be absorbed by organisms quickly and can profoundly affect  the nervous, cardiovascular, renal, reproductive and immune systems. Children suffer severe learning disabilities from lead exposure, which can begin in the womb. The U.S. Environmental Protection Agency lists lead among its most serious toxins—and it’s everywhere.

Lead plumbing and wine flavorings precipitated the decline of Rome. A century ago, the paint industry popularized freshening old, dark and drab Victorian-era homes with bright “white lead” paint, a new, chalking-resistant paint base. In the mid-1970s, the U.S. banned lead in paint (and in gasoline, jewelry, toys, plumbing and other items). Lead was being ingested by toddlers who ate loose paint chips as well as by adults who sanded and heat-removed old paint from their homes. Millions of older American houses have lead paint lurking just beneath newer, post-1978, coats of paint.

A common, continuing use of lead is the balance weights on automobile and truck wheels. These weights counterbalance the shimmying rotational effect of unbalanced wheel and tire combinations, thereby reducing tire wear and improving vehicle control. The weights either clip onto a steel rim with a steel clip or stick onto alloy wheels with a self-adhesive. Peel out, stop short, take a curve too fast or hit a curb or pothole and wheel and weight will soon part company. Virtually all “lost” wheel weights become part of the environment, in the form of abraded lead dust that is blown around the landscape to be inhaled or as pieces and particles in waterways to be ingested by wildlife and humans or as toxins in landfills. California “loses” about 500,000 pounds of lead wheel weights a year.

There is hopeful news however. Currently, California is one of six states that have banned the use of lead wheel weights on new cars or whenever a new or replacement weight needs to be installed. (The other states are Washington, Maine, New York, Vermont and Illinois).

California’s law has been in effect since 2010 and carries a $2,500 per day fine for non-compliance. The unfortunate news is that California has over 13 million cars and trucks on the road. Over 9 million of them probably have lead wheel weights clinging to their rims. California’s dry climate allows cars to be among the oldest on Earth, outside of Cuba, so it could take many years to retire our state’s inventory of lead wheel weights. In the meantime, the Federal Government needs to catch up to the six states that are exemplars. Much more has to be done to ensure lead is always recycled, never “lost.” Getting rid of this kind of weight will be a long-lasting toast to everyone’s health.